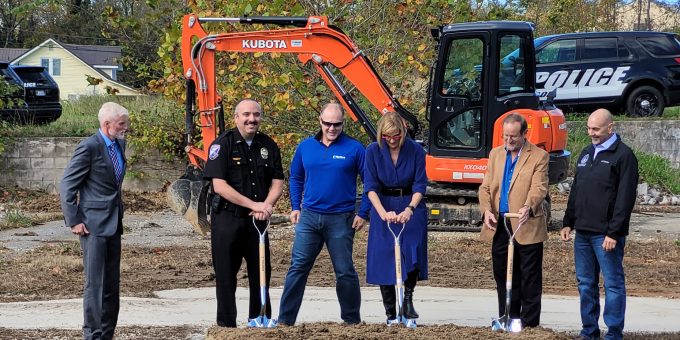 PAOLI – A groundbreaking ceremony was held on Tuesday for a new Paoli Police Department building.

Councilman Danny Hickman, Lt. Gov. Crouch, and Chief Randy Sanders raised the first shovels from the plot of land slated for the new police station. The location is situated just west of the current Paoli Fire Department. The property was once owned by the Cornwell Company, a furniture manufacturer and prominent employer in the area. After a devastating fire destroyed most of the building, the factory shut down in 1976 and the land has lain dormant ever since. Just as the fire department rejuvenated their piece of the old Cornwell property, Paoli Police Department’s new facility will bring this historical ground back to life.

According to Chief Sanders, the facility will incorporate design elements from the fire station so that each building will complement the other and form a public safety campus easily accessible by the citizens of Paoli. Included in the new plan will be a training room that will be used for CPR certifications, firearms safety, and defensive tactics courses available to the public.

During the ceremony, remarks were made by both Councilman Hickman and Lieutenant Governor Crouch, as well as Greg Martz, the lead developer from GM Development, who has done the building design. Three state representatives also attended Stephen Bartels (House District 74), J. Davisson (House District 73), and Chris May (House District 65). T

Chief Sanders says the building should be completed in a year and a grand opening ribbon cutting will be held to celebrate.

Representative Bartels said, “We’re all looking forward to the guns and hoses, barbecues, and chili suppers.”