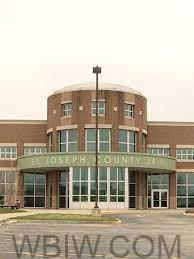 ST. JOSEPH CO. – The Indiana State Police has been requested to investigate the death of an inmate at the St. Joseph County Jail.

The Indiana State Police were contacted Sunday afternoon, October 24, 2021, after jail staff found the inmate unresponsive in a jail cell at approximately 1:05 p.m.

An autopsy will be performed on Tuesday, October 26, 2021, in Kalamazoo, MI, and those results are pending.