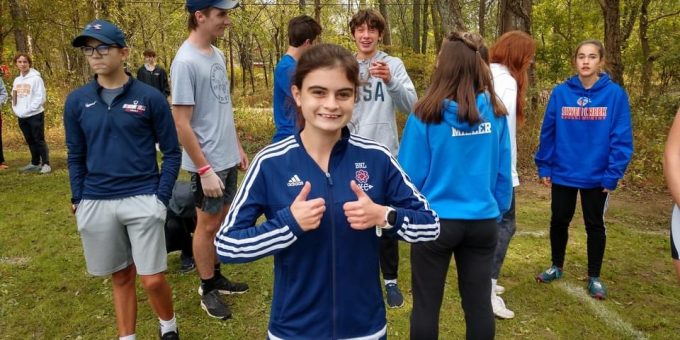 Both runners clocked personal-best times while coming up short in their bids to qualify for the IHSAA state meet during the semistate races at Brown County on Saturday.

Tanksley, a senior headed for Waynesburg University, shattered her career mark, crossing the line in 19:46.3. She was 45th in the field but failed to secure one of the individual spots for the state meet. The top six teams in the field of 20, plus the top 10 individuals who were not members of advancing teams, earned a spot in the state finals at Terre Haute on Oct. 30.

Tanksley certainly left in all on the course. She sprinted out in the fastest first mile (5:50) of her career and smashed her previous best for the 5k event by almost 30 seconds. Despite that effort, she was 14 places (and 33 seconds) back of the 10th qualifying spot during a sizzling race on the flat, fast curse.

“Today was tough for me,” said Tanksley, who made her third appearance in the semistate. “I was hoping I would be able to run one last time, but that didn’t happen. However I still ended with a big drop. It’s not 19:30, but at least I get to say that I ended my high school career with a PR.”

“It was a very surprising breakdown for the teams, and that changed our calculus on what it would take,” BNL coach Jill Vance said. ”But Grace outran her expectations once again. She was supposed to be projected another 10 places back.

“It’s a disappointment to not get out, but she has so much to be proud of from this race. I couldn’t be more proud of her. Going to state was a tough goal to hit, but there is nothing to be disappointed about. She ended it right.”

Bailey, a freshman, got caught in the wake of a race with incredible speed at the front. Columbus North’s Reese Kilbarger-Stumpff was the winner in 15:10.5, and the 10th individual qualifier (New Albany’s Aidan Lord) was 20th overall in 15:55.5.

“What an incredible race,” BNL coach Jon Calhoun said. “Brown County showed why it is one of the most competitive semistates in the state. Jonah was one of those individuals who ran an incredible race (a career record by 21 seconds). What a way to end his freshman season.

“It is time to cherish the moment, take some time off and get back after improving, getting stronger both mentally and physically, and getting that competitive fire again. Jonah is an amazing individual who has the drive. I can’t wait to see his growth in the years to come.”