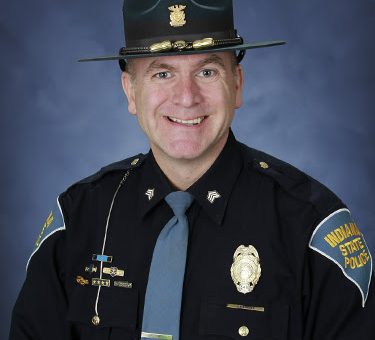 INDIANA – After 26 years of dedicated service to the citizens of Indiana, Sergeant Shawn O’Keefe is retiring.

Sergeant O’Keefe is a native of Indianapolis Indiana and a 1984 graduate of Roncalli High School. After high school, Shawn attended Vincennes University where he graduated in 1986 with a degree in Law Enforcement. After college Shawn joined the United States Marine Corps where he served from 1987 until 1991, at the time of his honorable discharge he held the rank of Corporal.

O’Keefe was selected to attend the 52nd Indiana State Police Academy and graduated in June 1995. His first duty assignment was to the Pendleton District where he patrolled Madison County. In 2003 he was promoted to the rank of Corporal where he served as a District Duty Officer at the Pendleton District. In 2010, due to a district realignment, he transferred to the Indianapolis District where he continued to serve in some capacity. In 2012 Shawn was promoted to the rank of Sergeant, where he has served for the past nine years leading and mentoring a squad of troopers in the Indianapolis District.

In 1995 O’Keefe responded to the scene of a serious car accident with entrapped occupants on I-69 and the vehicle was on fire. Good Samaritans pulled three people from the vehicle before it became engulfed. When O’Keefe arrived he realized there was still a six-year-old girl entrapped in the wreckage and the vehicle was fully engulfed in flames. He crawled through the back window of the car and pulled the six-year-old from the wreckage. The six-year-old fully recovered from her injuries and is now a lawyer in New York City. Because of his heroic actions, O’Keefe was awarded the Gold Star of Valor for Heroics, the highest Indiana State Police Honor. He was later awarded the National Trooper of the Year Award in 1997.

Shawn’s wife Mary Ann is also a state police employee and serves as an evidence clerk. He is the proud father of Tyler (26), Ashley (24), and Meghan (20).