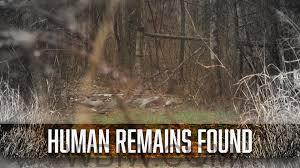 A hunter found the remains around noon on Tuesday, October 12 in woods about a quarter of a mile off of Ogala Horse Camp Road, according to the Brown County Sheriff’s Department.

Investigators believe the remains could be related to a missing person case in Bartholomew County.

County Coroner Earl Piper said the person’s cause of death and identity remains under investigation, but he does not suspect it was criminal in nature. Piper says the identity of the deceased will be determined using DNA analysis first then dental records. Piper says it could take between 10 days or months to get back the results.