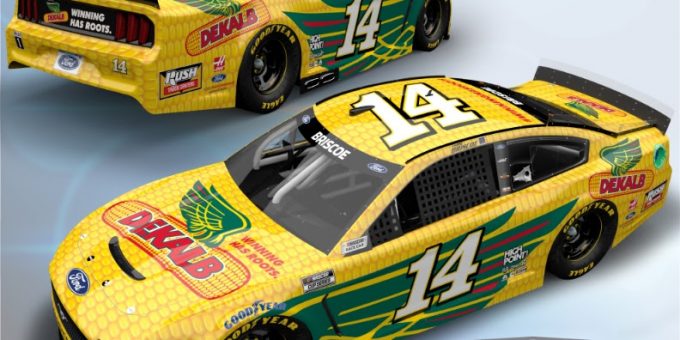 KANSAS CITY – The countdown is on to the final checkered flag of the season as the NASCAR Cup Series heads to Kansas Speedway in Kansas City for the second time this year.

“We’ve come a long way since the last race at Kansas. Just last weekend, we were able to show we can come into the 550 (horsepower) races with top-10 speed,” said Briscoe. “I think that can for sure transfer over to this weekend and we’ll try to go pick up where we left off. Kansas is a place where you can move around and find your line – the opposite of Texas, really. I’ve always enjoyed racing there, reminds me a lot of dirt racing and having those options to find what you need as the track and car change.”

In May, Chase Briscoe and the No. 14 Ford Mustang team for Stewart-Haas Racing (SHR) earned a 20th-place finish at Kansas but have since finished inside the top-15 five times at intermediate tracks with a best of 11th earned twice – in May at Darlington (S.C.) Raceway in and in August at Michigan International Speedway in Brooklyn.

Though the result doesn’t show it, the Cup Series rookie was on pace for his best finish of the season last weekend at Texas Motor Speedway in Fort Worth. Briscoe and the No. 14 DEKALB® Ford team are riding a wave of momentum into the final race on a 1.5-mile track this year after he ran in the top-10 for the first two stages in Texas and was racing hard for the sixth position when contact with Denny Hamlin resulted in damage to the right side of the No. 14 and a flat tire during the final stage. After going a lap down while making repairs, Briscoe fought his way back to the lead lap and eventually secured his 11th top-15 finish of the season. It was also Briscoe’s fourth top-15 in the last five races.

There’s been a lot of discussions this week about the incident with the No. 11 late in the race. Is this just one of the many tests you face as a rookie driver?

“Yeah, I think so, but I haven’t done anything different than what I was doing earlier this year. Except maybe that we’re running better, so I’m around those guys that are up front every week,” said Briscoe. “I’m not going to purposely try to mess up a playoff driver’s day and put them in a bad spot. But, I’m not there to pull over and let them go. I was put in the 14 to win races and, to do that, I’ve got to race as hard and smart as I can every week. I always try to respect the guys I’m racing against because that’s what I’d want them to do for me, but that doesn’t mean I’m going to wave someone by. I’m racing for something, too.”

DEKALB brand returns to the No. 14 Ford Mustang for this Sunday’s Hollywood Casino 400. The DEKALB brand was first featured on the SHR machine driven by Kansas native Clint Bowyer and, much like the iconic No. 14, DEKALB brand corn has built a reputation for proven performance for more than 100 years. The newest version of the DEKALB Corn Car Briscoe will drive this weekend features a message important to farmers and racers alike: Winning Has Roots. Winning is more than a goal, it’s a state of mind. Just ask any farmer or NASCAR driver pushing to improve their performance each and every season. Once a winning mindset takes hold, it drives everything else, shaping families and defining legacies at every turn. Because, winning has roots.

In celebration of the rookie driver joining the DEKALB brand racing family, fans are invited to join the Chase for the Corn. If Briscoe takes his DEKALB Corn Car to victory lane at Kansas, four randomly selected members of the Chase for the Corn Facebook event will win free corn for 2022. All members must do is mark “going” for a chance to win.

Briscoe leads the Cup Series Rookie of the Year standings by 267 points and has been the highest-finishing rookie driver in 27 of 32 events. With Rookie of the Year honors in the Truck Series (2017) and Xfinity Series (2019), Briscoe is looking to join Erik Jones and William Byron as only the third driver in history to claim the title in all three of NASCAR’s top national touring series.