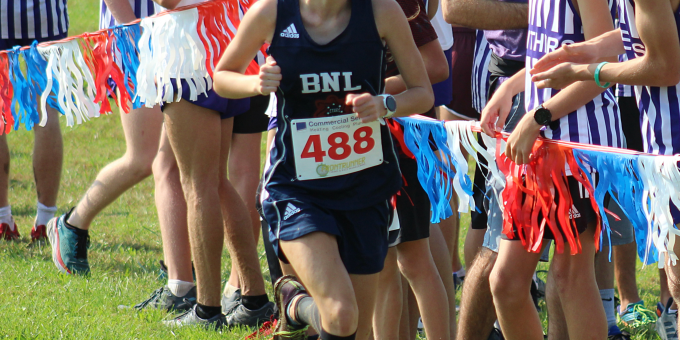 BEDFORD – The finish line torments, teases, tantalizes. Distance runners race against the clock, but the finish line is the true enemy. Can you make it there? How quickly? The real battle is within, the mind convincing the body of the possible, testing the limits of endurance and stamina.

Bedford North Lawrence’s Grace Tanksley and Jonah Bailey are winning that inner struggle. It’s mind over matter, and only the finish matters. They are one step away from crossing the line to the final stage of the IHSAA’s state tournament series.

Tanksley and Bailey will compete in their respective semistate races on Saturday at Brown County. The top 10 individuals who are not members of the six qualifying teams (in the field of 20 teams, plus 40 other individuals) will advance to the state championship race on Oct. 30 in Terre Haute.

On the surface, they couldn’t be more different. Tanksley is a senior, a sprite 5 feet tall, barely over 90 pounds, who has to take almost double the amount of steps to keep pace with long-legged, lanky opponents. She’s a big-race veteran, making her third straight semistate appearance. Bailey is a tall, gangly freshman who didn’t know anything about the postseason until he got there. Just point him the way and get out of the way.

They share a common characteristic – motivation. Tanksley is chasing her first ticket to the state finals. Bailey is fueled by desire to be the best, at least in his age group. They’ll get their chances to prove it on the ultimate proving ground this week.

For Tanksley, this is her moment. She will be a contender for one of those coveted individual invitations to the state meet, so there’s some pre-race pressure and nervousness. She is peaking at the perfect time for a premium performance, if her recent trends and times continue.

Can she do it? Absolutely. She ran a personal-best race of 20:25.23 on her tough, hilly home course while finishing 11th in the regional, and she posted a career-best time of 20:15.85 during the Hoosier Hills Conference meet (at Crawford County) earlier this year. BNL coach Jill Vance expects the state cut line to be a faster time, but Brown County’s flat, tight course is known for producing faster times. It’s a speed race.

“Looking at numbers, we need to be around 19:30 and in the top 30 for a chance,” Vance said. “There’s a group of seven or eight girls vying for the last two individual qualifiers. It will be close. I will feel good about her chances if she hits either one of those markers. She’s right there.

“She has to be really careful. She got boxed in early at the regional, and if that happens she will feel the consequences of that a lot more. It doesn’t mean she’s sunk, but it will take a lot of work to get out of that. She needs to take the pace she ran at the regional for the first mile and hold that. She can’t afford the drop-off in time.”

Tanksley’s strategy will be simple: “Run really fast,” she said with a smile. Digging a little deeper than the obvious, she will need a fast, unobstructed start on the long opening straightaway that defines the Brown County course, get in position for the narrow, twisting mid-section of the two-lap tour, and fight for every spot.

“It has got be a fast start,” Tanksley said. “It’s possible to pick people off, but with the size of the field (180 competitors) it’s tough. It’s knowing the best places to pass people. Then just holding on the second and third mile. That’s what will get me out. I can do it on that course.”

Tanksley finished 65th last year in the semistate in 20:29.0 while teammate Autumn Spence crossed in 19:39.2 and grabbed the final individual qualifying spot (30th overall) for the state meet. Spence passed a pack in the final 1,000 yards of the 5K sprint to get there.

“We’ll be in a similar position,” Vance said, “hoping and crossing our fingers.”

For Bailey, there are no such expectations. He made his way to the front of BNL’s team midway through the season, then worked his way through the sectional (20th in 18:12.44) and regional (28th in 17:54.00) and became the first BNL freshman in 12 years to make it to the semistate.

“It feels really good,” Bailey said. “I didn’t expect to be here. It took a lot of effort and working really hard to get me here.

If last year’s numbers can be used as a prediction scale, it will take something phenomenal to reach the state finals. The final individual qualifier from 2020 was 22nd overall in 16:18.5 to advance. And the quality of the boys field has not waned. Bailey just has to relax, let his mind convince his legs to go faster, and see where he finishes.

“It’s the ultimate sport,” BNL boys coach Jon Calhoun said “It’s about 90 percent mental and 10 percent physical. But there are a lot of studs in this race. It will be a dogfight.”