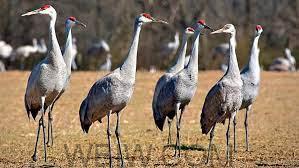 MEDARYVILLE – Large flocks of sandhill cranes can be seen at Jasper-Pulaski Fish & Wildlife Area from mid-October through mid-December. Crane numbers peak in late November or early December. On Tuesday there were more than  3,540 cranes in the wildlife area.

At sunrise, gigantic flocks rise and fly from their roosting marshes to feed in surrounding private land (agricultural fields). On their way to feed some birds stop in the open grassland areas of the refuge.

At sunset, beginning about one hour before sunset, flocks of cranes kite into the refuge near the observation area from all directions. They gab and socialize again before returning to roosting marshes at dusk.

While this is the cranes’ usual routine, it is important to remember they are wild animals and are not always predictable.

The crane spectacle is best seen from the observation platform at the Sandhill Crane Observation Area. View a property map. During the day, cranes can be spotted feeding and dancing in nearby harvested farm fields. Roosting marshes in the Waterfowl Resting Area are closed to the public so that migrating birds can rest without human disturbance.

While cranes may gather close to the observation platform, they are usually several hundred yards away. A few stationary viewing scopes are available but bringing your own spotting scope or binoculars is recommended. If you are photographing cranes, your most powerful zoom lens will come in handy, as trying to get too close to these birds will easily spook them.