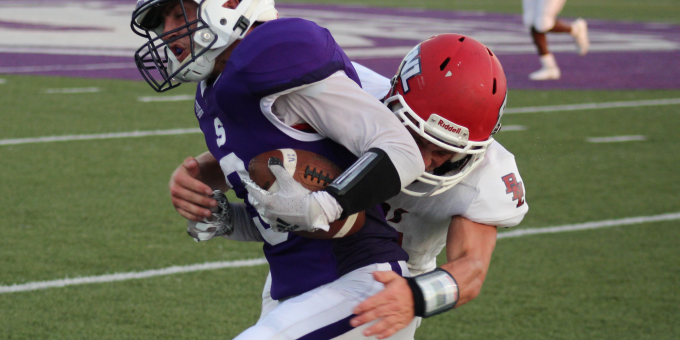 BEDFORD – Famous thieves often achieve cult status. The English legend of Robin Hood dates back to the 1300s, depicting a hero outlaw who robbed from the rich and gave to the poor. A bandit with a moral compass. American robbers Bonnie and Clyde were public enemies whose exploits earned sympathy in popular culture. Aladdin was a self-proclaimed “street rat.”

Where does Bedford North Lawrence’s Jesse Brock rank among the burglars? Somewhere between Jesse James and Vincent Peruggia, the man who swiped the Mona Lisa off the wall of the Louvre. Brock, with a hitter’s tough mentality and a pickpocket’s panache, roams the secondary and takes what he can.

Brock, BNL’s senior safety, ranks 14th in the state this season with five interceptions, including a pick-six touchdown. He’s probably more proud of his 62 tackles (including four for loss), because hitting is his passion. But it’s his ability to steal passes, to immediately turn momentum with the explosive quick-change play, that makes him most dangerous.

His secret? Reading. Not the pages of literary classics, but the eyes and hands of his opponents. Receivers know when the ball is coming their direction, and usually give away its approach. That’s when he pounces.

“Wait for a reaction and make a play on the ball,” Brock said. “Key the receivers and keep a slight eye on the quarterback. I can’t get washed up watching the quarterback and lose the receiver. It’s the hands and eyes. That’s what usually catches me. It’s being prepared.”

Brock’s victims include Martinsville (twice, including a 45-yard return to set up a touchdown), Jeffersonville, Floyd Central (with a 70-yard return for a touchdown) and Madison. He played free safety as a sophomore, cornerback as a junior, and now strong safety as a senior. He’s seen it all back there.

“He’s an instinctual kid,” BNL coach Derrick Barker said. “He’s played all three spots for us over the last three years. He has those skills of understanding how route concepts work, and he’s a quick kid who can go from a backpedal to turning and running to break on a ball. And he has good hands. He can go up and get a ball.”

His favorite, of course, was the return for a score. That’s a defender’s dream. At the time at Floyd, it was a huge play, getting the Stars on the board with their first score.

“I was playing a little deeper, just waiting for it to happen,” Brock explained. “They had run that play to the opposite side all night. I was keying on it. Scoring, I ate that up.”

“I have given him a hard time since the Martinsville game about returning them close to the end zone,” BNL assistant Jason Webb, who coaches the safeties, said. “I was glad he finally took one all the way against Floyd.

The interceptions are the highlight plays, the shockers that can turn on a defense and flip the switch for a struggling team. Brock gets a bigger thrill from a big hit. As a safety, he’s the last line of defense. If the ball gets past him, it’s going to the end zone. So when he’s watching game film, he’s looking at his job from that standpoint. When someone in the secondary makes a mistake, everyone sees the result.

“I love tackling. I would rather hit than get picks,” Brock said. “I watch more stuff on myself to fix my mistakes. It’s good sometimes, but the bad stuff I see my mistakes. It helps me learn what to do right.”

“We can move him around back there, a lot of times he’s the last line of defense,” Barker said. “He has to be able to really focus on technique and get the guy down. He has seen a lot of different offenses. He studies film and understands what the offense is trying to do.“

The Stars (4-5) are currently in the bye week before starting the postseason on Oct. 29 against Seymour. BNL won that first clash 35-29, although Seymour quarterback Bret Perry torched BNL’s secondary for 327 passing yards and three touchdowns, and receiver Jaylan Johnson had 10 catches for 175 yards. Guess who Brock will be studying until then. BNL (which has 10 interceptions this season) didn’t get a pick against the Owls. That could be a pivotal stat in the rematch.

“We’ve really put a lot of focus on creating more takeaways, attacking the ball when it’s in the air,” Barker said. “You flip that momentum, and with high schools kids that’s such a big part of the game.”