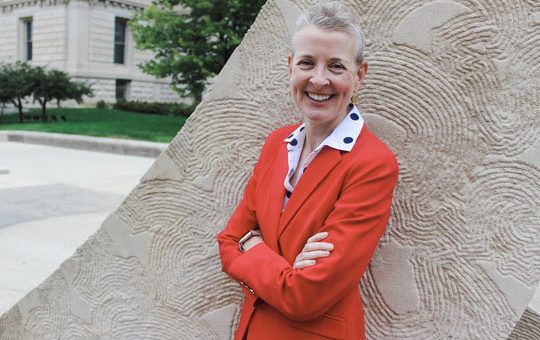 BLOOMINGTON – Miah Michaelsen will serve as the agency’s next executive director. Michaelsen’s history with the IAC spans more than a decade, beginning as a regional arts partner for both the City of Bloomington and the Bloomington Area Arts Council. She has served as the agency’s deputy director of operations since 2016.

Before joining the IAC, Michaelsen served as the first assistant economic development director for the arts for the City of Bloomington. In that role, she developed and implemented all aspects of programming and services offered to the creative sector by the City of Bloomington and its state-designated cultural district, the Bloomington Entertainment and Arts District (BEAD).

She also served in executive director roles for the Bloomington Area Arts Council, the Children’s Hands-On Museum in Tuscaloosa, AL and the Kentuck Art Center and Festival in Northport, AL. She has served on panels including the National Endowment for the Arts, Arts Midwest, the Michigan Council for Arts and Cultural Affairs, Arts Council of Indianapolis, and Cuyahoga Arts and Culture.  Michaelsen is a graduate of Hendrix College (Conway, AR) with a BA with Distinction in Theatre. She lives in Bloomington with her husband, Jonathan, and has two adult sons, Brendan and Wyeth.

Michaelsen replaces Lewis Ricci, who retired after 15 years of service as executive director of the Indiana Arts Commission.