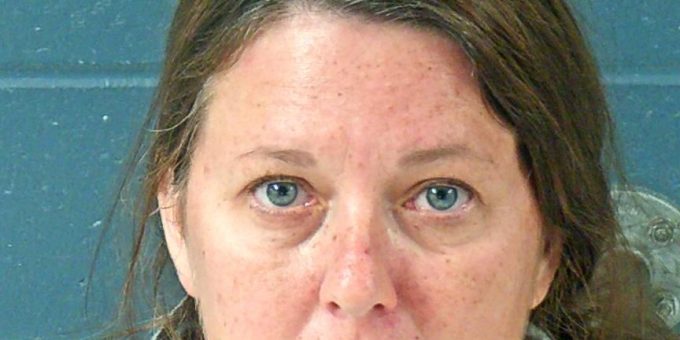 MITCHELL – A Mitchell woman was arrested when Mitchell Police officers were called to a home in the 1060 block of Clover Lane on Thursday, Oct. 14th at 11:30 p.m. after a report of a physical domestic fight in progress.

A 13-year-old male reported his parents were inside the residence and actively fighting.

Officers arrived and found a male and 51-year-old Michelle Cox inside the home. Officers say Cox was intoxicated. The officers separated the couple.

The male told officers there was a verbal fight and Cox began breaking items in the home. She then picked up a knife and began walking toward the male swinging it. The male suffered a bleeding wound on his back, but declined medical attention.

Officers found the home in disarray presenting holes in the drywall and broken items.

An officer then spoke to Cox, who was outside the home. Cox refused to answer the officer’s questions. She then stated she was retrieving her phone to contact her attorney as she attempted to enter the home. Cox was commanded to stay at her outside location, but she refused and ran inside the home. The officer followed where there was a struggle and Cox was arrested.

She continued to struggle with the officers as they placed her in their police vehicle.

​If you or someone you know is involved in a domestic violence situation and needs help, call Hoosier Hills PACT 24-hour crisis line at 1-888-883-1959 or visit their website at https://www.pactchangeslives.com/.