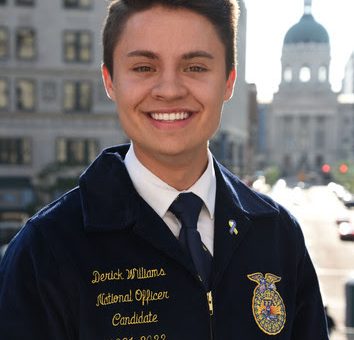 INDIANA — Notre Dame freshman Derick Williams is competing against 39 of the United States’ most elite young agriculture leaders for one of six National FFA officer positions. Williams was selected by a state nomination committee to serve as the National FFA Officer candidate on behalf of Indiana. The officers selected will be announced during the final session of the National FFA Convention & Expo, taking place Oct. 27-30 in Indianapolis.

“I’ve been honored to meet hundreds of Indiana FFA members from across the state during my time as lieutenant governor, and each time I am blown away by their professionalism and leadership skills,” said Lt. Gov. Suzanne Crouch. “Best of luck to Derick as he prepares and begins the interview process. Indiana is rooting for you.”

Williams hails from Union City and is a 2020 graduate of Union City Jr-Sr High School. His FFA involvement started his eighth-grade year and since has had the opportunity to be involved in numerous career and leadership development events. Most notably, William’s favorites were extemporaneous public speaking and soils evaluation. Throughout the past year, Williams served as the 2020-2021 Indiana FFA State Reporter.

“FFA is such a powerful organization. Derick, for example, did not come from an agriculture background, but through his involvement in FFA has now decided after completing his education he wants to bring his skills and passions back and apply them within our industry,” said Indiana State Department of Agriculture Director Bruce Kettler. “I wish Derick the best of luck and am certain his experiences, knowledge, and passions will carry him far wherever his future leads.”

After completing his state office tenure in June, Williams headed north to South Bend where he is studying Chemical Engineering at the University of Notre Dame. He has a strong interest in sustainability and battery technology and aspires to use that knowledge to find his niche in the agriculture industry one day.

“The year ahead holds unlimited potential for the FFA, and I look forward to the opportunity to uplift thousands of young members across the country,” Williams said. “My success in the organization is due in large part to the advisors who guided me on this journey, and I hope to do the same for our future agricultural leaders.”

Outside of the classroom, Williams has made it a point to take advantage of the leadership development opportunities at Notre Dame. Since arriving on campus he has gotten involved in the First Year Leadership Council, Judicial Council, American Red Cross Club, among others.

“Derick has been diligently preparing for this opportunity since the conclusion of his year serving as a state officer,” said Indiana FFA Director Sam Miller. “Derick is an excellent representative for Indiana FFA. I am certain whatever lies ahead for Derick he will be met with great success.”

To become a National FFA officer, Williams will undergo a week-long selection process and will be evaluated on everything from his written and verbal skills to his ability to facilitate classroom discussions. If selected, he will join the five other officers, traveling the country and promoting FFA to business and industry leaders, FFA members, government and education officials, and the general public.