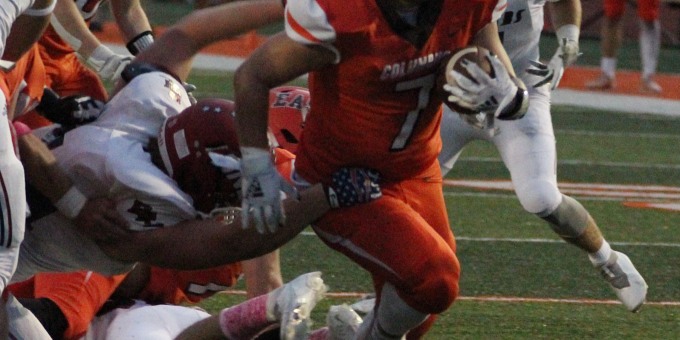 COLUMBUS – Bedford North Lawrence landed the first punch, knocking the opponent down. But not out. Columbus got up, not even groggy, perhaps embarrassed and a little angry, and jabbed the Stars to death.

The physical Olympians pounded away, like a butcher on a tough piece of meat. The jabs didn’t inflict major damage in individual increments, but the sum total of the constant attack on the front line was devastating as East ran over BNL like road kill.

The final punishment was 31-15, with East extending its winning streak in the series to 17 straight. But that doesn’t reflect the true dominance. The Olympians (4-5, 4-2 in the Hoosier Hills Conference) kept smacking the Stars in the mouth until they drew blood, knocked a few teeth loose, and celebrated their Senior Night with a clinched-fist victory in the regular-season finale.

Tryce Villarreal was the wrecking ball, blasting away 30 times for 129 yards and two touchdowns. Slippery quarterback Ethan Duncan slashed for 109 rushing yards. And here is the tale of the tape: 76 rushes, 25 first downs as East’s rugged offensive line pummeled BNL into the pellets that comprise the turf.

After giving up a stunning touchdown on the first play, with Zane Anderson galloping 68 yards for knock-down shot, East overwhelmed and won the point of attack. BNL ran only 17 plays in the first half, totaled only 39 yards the rest of the half after the Anderson dash, and got caught under the steamroller.

“We know who we are,” East coach Eddie Vogel said. “We don’t have some of the game breakers we’ve had in the past, but our offensive line is awfully good and our backs run hard. Our line was pretty awesome. We were able to bang it at them.”

So the East line deserves introduction: senior Ethan Clark (6-3, 240), senior Ashton Hartwell (6-3, 255), senior Josh Luedeke (6-1, 275), senior Jaden Durnil and junior Jacob Guse. They were the hammers, while Villarreal and Duncan were the nails, and deserve as much credit as anyone for the brutal way East bashed BNL around.

BNL (4-5, 3-3) was cognizant of not surrendering the big-chunk play, and it didn’t. But neither could it withstand the pummeling. East’s longest run was 11 yards. Think about that for a moment.

“We couldn’t give put the big play, the broken tackles and 70-yard runs,” BNL coach Derrick Barker said. “We harped on that, really stressed making them earn it.” Well, East did that, with five drives of 14-plus plays.

The big play was Anderson’s, who ripped up the middle, found a crease and spotted surprising daylight. Not the fastest guy, he still won the footrace for a 7-0 lead only 19 seconds into the contest. And when two penalties stopped East’s first march into the red zone, finally resulting with a missed field goal, the Stars were in possession of momentum.

“It was not being ready, I guess,” Vogel said. “They gashed us, had a good play call. But luckily our offense answered. We started over at 0-0.”

That shifted in the second quarter. Villarreal capped a 14-play drive with a 1-yard burrowing run for a 7-7 deadlock. After the Stars went 3-and-out, the Olympians were the unstoppable force once again, going 63 yards in 9 plays, with Duncan hitting Logan Christophel from 9 yards for the go-ahead score. East added a late score, with Villarreal blasting in from 2 yards for a 21-7 lead at the half.

When East started the second half with a 15-play, 6:03 drive, completed with Nathaniel Hedrick’s 21-yard field goal, the Stars were staring to lose touch with the leader. And when East rumbled 85 yards in 16 plays with its next possession, with Javeon Smith diving home from 1 yard, the gap was an insurmountable 31-7 with 9:55 left.

BNL wanted to bend without breaking. The defense bent but also broke.

“We had to win the plays in the red zone,” Barker said. “They won the majority of them. We couldn’t make the one play. By no means did we want to give them four yards, but it was frustrating when we couldn’t get off the field.

“We had to survive the first quarter, there’s been a lot of years we’ve been down 28-0 just like that. We didn’t want to get caught staring at the orange helmets. But offensively we didn’t get in a rhythm. That was the flip side. We knew we had to get first downs. The second quarter is where we lost it.”

BNL couldn’t establish a rhythm until it was too late. Memphis Louden competed three passes and Dylan Nikirk scored from 6 yards with 1:04 left. But those were meaningless numbers in the bigger picture of the entire game.

BNL finished with 206 rushing yards, mostly thanks to Anderson’s burst and a 38-yard option run by Nikirk.

The Stars now get a week off to prepare for a home rematch with Seymour in the Class 5A sectional semifinal on Oct. 29.