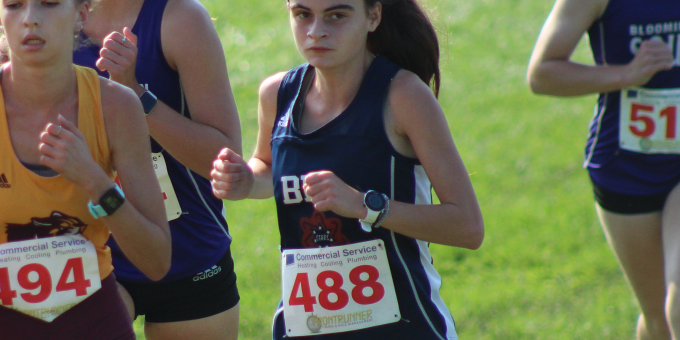 BEDFORD – Remember the old Wide World of Sports intro, with the famous “the thrill of victory, and the agony of defeat” line? Bedford North Lawrence’s Grace Tanksley experienced that entire spectrum range of emotions during one race.

Flash back to last year’s regional. Tanksley got swept up in the wash of a collision and crash – like poor Vinko Bogataj, the ski jumper whose wipeout was featured in that infamous clip – during the early moments of the mad-rush start, and she agonized over the worst. Her shot at advancing to the semistate seemed to have gone down with her. But she jumped up, regrouped, and experienced the supreme thrill when she made the cut for the next stage of the state tournament series.

Back to today. If Tanksley can remain upright, and after last year nothing can be taken for granted, she’s one of the favorites to qualify for the IHSAA semistate when BNL hosts the regional on Saturday morning.

Tanksley and teammate Francesca Orozco will compete as individuals, chasing one of the top 15 spots (reserved for competitors who are not members of the top five teams in the 10-team field) and a chance to race at Brown County in next week’s semistate.

In the boys race, BNL’s Jonah Bailey, Cole Baker and Zane Thompson will look to wade through the talented field and qualify for the next stage.

Tanksley certainly has the experience factor in her favor. She has qualified for the semistate the last two seasons, and she’s racing for the final time on her home 5K course.

“I’m confident in my ability to advance because I have already done it twice,” she said. “Knowing I can do it helps to ignore my own doubts.”

Tanksley finished eighth in last week’s sectional race, cruising through the wake of the front-running pack to finish in 20:43.86. She plans a similar strategy as the regional field adds talented qualifiers from the Terre Haute North sectional into the field.

“Grace is definitely running to qualify for semistate,” BNL coach Jill Vance said. “Although course conditions were poor at the sectional, affecting finish times, from a position standpoint she ran an amazing race. It was her first time running up with the top girls from Bloomington and she proved that she belongs there. She gained a lot of confidence from that race. She belongs in that front pack and will be aiming for the first or second individual qualifying spot.

“I know that I will have a guaranteed shot out if I stay with top teams,” Tanksley said. “As always, I am trying to get faster, especially on my home course. However, positioning myself with the top teams and individuals is more important. Faster times are possible if I do this.

“On a perfect day this will be a very fast race. However, if it rains too much (rain is forecast for Friday night) it will slow everyone down. It all depends on what the night before and that morning look like.”

Orozco, a quiet freshman, made a loud noise with her sectional finish. She grabbed the final individual qualifying spot while crossing in 26:17.97.

“This is just great experience for her,” Vance said. “Every level of postseason, the level of competition goes up. Getting some experience at the regional as a freshman will make it easier for her to relax next year.”

“I think they all need to run better races than they did in the sectional to make it out,” BNL coach Jon Calhoun said. “You also have to be in the 17:40-17:50 time wise and in the 30s overall in the race (places) to have a chance of making it to semistate.

“I think we have a really good chance of getting a runner out to semistate. They will all have to run a better race, but that is how regionals should be. The stakes run higher and competition is better the further you move into the IHSAA tournament.”

The regional is a stepping stone, both for the next level on the way to the state finals and for next season. Bailey is a freshman while Baker and Thompson are juniors.

“They have been been working hard in preparing,” Calhoun said. “It is a race of determination but also celebration for their hard work they all put in this summer. Cole’s guidance and motivation throughout the year has really helped set the tone with Jonah and Zane.

“What I have been telling the guys, enjoy the moment and don’t wait to take the spot, because it won’t be there. Go after and take it yourself through racing hard, racing smart, and racing with all your heart and soul.”