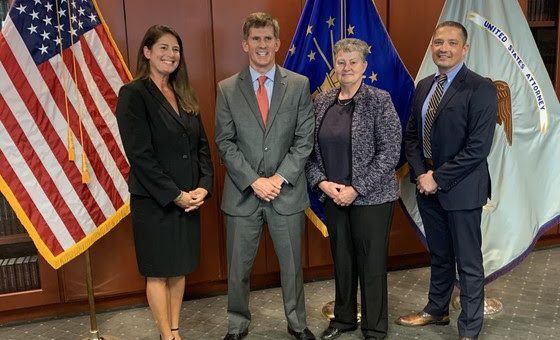 INDIANAPOLIS – On Tuesday, two investigators from the Indiana State Police’s Cybercrime and Investigative Technologies Unit, along with investigators from the Federal Bureau of Investigation and the Washington County, Maryland Sheriff Department were honored for their role in the investigation and prosecution of Buster Hernandez during a small ceremony hosted by the United States Attorney, Southern District of Indiana.

“I am so very proud of the expertise that First Sergeant Cecil and Sergeant Barnes were able to bring to this investigative team which assisted in the prosecution and sentencing of this person who sought to do harm to so many innocent people”, said ISP Superintendent Doug Carter.

To see the press release issued by the United States Attorney’s Office, Southern District of Indiana on the sentencing of Hernandez from March of this year, click here.