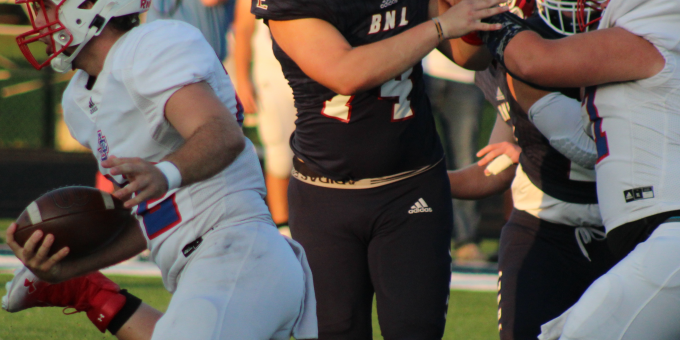 BEDFORD – The dynasty, arguably the most impressive, cold-blooded reign in Indiana sports history, has finally ended. Columbus East, after 17 years of unmatched dominance, will surrender the Hoosier Hills Conference crown. And what a monarchy it was.

The numbers are unfathomable. The Olympians won 96 consecutive league games (107 if postseason clashes with HHC opponents are included) and won an average of 11.2 games a year over the last 18 seasons. The remarkable run included two state championships. Nobody in the conference could touch them.

The fall from the throne was stunning. Sure, some slippage was expected when Hall of Fame coach Bob Gaddis announced his retirement after 20 seasons with East, after a 212-43 record, after 330 career wins in 42 total years on the sideline. But few were prepared for the end of the streak, with Seymour’s 28-24 comeback win on Sept. 3, and the subsequent loss to New Albany. East is now a pedestrian 3-5, in danger of suffering its first losing season since 2002.

But beware, and be warned. Bedford North Lawrence (4-4, 3-2 in the HHC) is not about to encounter a dead carcass when it travels to East for the regular-season finale on Friday night. The Olympians might be down, but they are hardly out.

BNL, coming off its best performance of the season, will seek to end its own stretch of misery against the Olympians, who have won 16 straight in the series since 2006. The Stars haven’t won in Columbus since 1997. And most of the recent clashes have not been competitive.

Prime example: East clubbed the Stars 63-20 last year, totally dominating the line of scrimmage while totaling 426 rushing yards. East scored on seven of its first eight possessions (in four plays or fewer) while clinching its 17th consecutive HHC title. The Olympians might have changed coaches, with former assistant Eddie Vogel now in charge, but they have not changed their spots. They will run the ball directly at BNL. Stop it, or get trampled.

“They’re still, at the end of the day, doing a lot of the same things they’ve done for many years,” BNL coach Derrick Barker said. “Early in the year (during a 1-4 start), they were trying to identify who they were. They’re still hanging their hat on pounding the ball. We know they will challenge our physicality, essentially our manhood, early on and see if we can stop them.”

“We’ve always been a team that has run the ball when we’ve wanted to and needed to,” Vogel said. “Our strength has been our offensive line, we’re leaning on them.”

“Last week against Madison we were totally geared up to stop the pass, double-teaming receivers and getting a pass rush,” Barker said. “Now turn that on its head. Every play, they will have two or three guys in the backfield that are running threats. We have to respond.”

East’s slow start (with losses to Whiteland and Columbus North before the Seymour stunner) can be traced to youth. Now the Olympians are coming of age with wins over Floyd Central (28-14) and Jeffersonville (27-7).

“We’ve not had the success we’re used to,” said Vogel, who was a head coach at Evansville Bosse for three seasons before joining Gaddis as an assistant for the move to East. “We’re a young team that has had trouble finishing games. But we’re headed in the right direction.”

BNL certainly wants to head that way as well, with a two-week break before the start of the postseason. Momentum is so vital.

“We want to be playing our best ball,” Barker said. “We feel like we played a really good game last week, so we want to build on that, keep that momentum. It would be a huge confidence boost. Rolling into the sectional, it’s huge.”

To do that, BNL will need significant offensive contributions from sophomore quarterback Memphis Louden (1,224 passing yards and 11 touchdowns), from the balanced receiving corps (four different wideouts had TD catches last week), from running back Zane Anderson.

“They’re pretty balanced, they have good skill players,” Vogel said. “The quarterback throws the ball well, and he creates a challenge with his ability to extend plays. You have to keep your coverage and get a pass rush.”

“We have to keep the ball moving, building on the things we’ve done well,” Barker said. “It comes down to sustaining drives, getting three or four first downs in a row, avoiding the negative plays. If we can win field position, make them drive 75-80 yards, our chances are a lot better.”

Last meeting: Last year at East, the Olympians pounded the Stars 63-20. Mark McDonald ran for 139 yards and 3 TDs, and East scored on seven of its first eight possessions. The Stars had three turnovers and gave up 426 rushing yards.

Game notes: East has won 16 straight in the series. BNL’s last win in Columbus came in 1997. East’s last losing season was 2002. The Olympians have averaged 11.2 wins per year over the last 18 seasons.