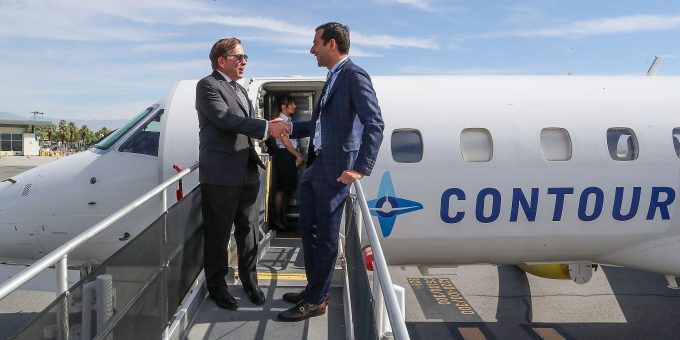 INDIANAPOLIS – For years Hoosiers have been waiting for an airline that can get them nonstop to key markets usually only accessible through time-consuming connecting flights. But that all changes today as Contour Airlines launches inaugural nonstop daily flights to the regional cities of Milwaukee (MKE), Nashville (BNA) and Pittsburgh (PIT).

Contour is the second airline this year to kick-off operations out of Indy, and originally announced its plans to enter into the Indianapolis market in February 2020 at the Routes Americas conference held in Indianapolis.

“Today is the demonstration of what happens when you hold tight to a vision and a plan, even through the toughest of times,” said Mario Rodriguez, executive director of the Indianapolis Airport Authority. “It’s also the fruition of a long-awaited hope for Indy air travelers who have been asking for years for nonstop flight options to what are traditionally regional drive destinations.”

Passengers who take off today on Contour will enjoy the airlines’ fleet of 30-seat ERJ-135/145 aircraft, featuring free seat selection and 36 inches of legroom in every row, which is equivalent to first-class on other domestic carriers.

“Our aircraft have no middle seats, allowing for more space between passengers, and will offer complimentary in-flight snack and beverage service,” said Matt Chaifetz, Contour’s chief executive officer. “We’re confident travelers will appreciate the comfort and speed of our nonstop air service, and the fact they will now have the opportunity to increase efficiency and productivity by having a one-hour flight to these markets.”

With the addition of the new nonstop routes from Indy to Nashville, Pittsburgh and Milwaukee, Contour will offer its premium low-fare airline product across a route map of 17 cities nationwide.

Headquartered in Smyrna, Tennessee, Contour plans to create more than 20 jobs to support its Indy operations.
Book a flight with Contour at www.contourairlines.com or by calling Contour’s Customer Care department at 1- 888-332-6686.