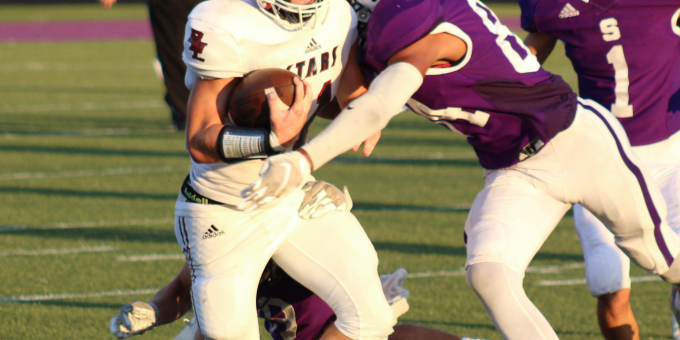 BEDFORD – Bedford North Lawrence received a first-round bye during the IHSAA draw for the state football tournament and will host Seymour in the semifinal round of Class 5A Sectional 16 on Oct. 29.

Jeffersonville (2-5) will visit Floyd Central (3-5) in the only first-round game of the five-team sectional, comprised entirely of Hoosier Hills Conference rivals. New Albany (5-3) will await the FC-Jeffersonville winner in the other semifinal.

The Stars (4-4) already own a 35-29 triumph over the Owls (on Sept. 17 at Seymour). BNL will also returning to the postseason after missing last year’s sectional, when members of the coaching staff were diagnosed with COVID-19 and the team withdrew from the tournament. The Stars will be chasing their second sectional championship (winning in 2011).

BNL has a lot of positive factors for the rematch.

“We’re happy we got the bye,” BNL coach Derrick Barker said. “It’s always good to get a week off at the end of the season and rest for the sectional. Playing at home is a good thing. We knew we would have a tough game against any team we’ve already played. We will have our hands full with Seymour.”

BNL won the first encounter at less than full strength, with Brye Lewis throwing two touchdown passes and running for two more during a tense clash with the Owls. Bret Perry threw for 327 yards and three touchdowns for Seymour.

“It will be tough to beat a team twice,” Barker said. “We didn’t have everyone there, which will make it a different game. Hopefully the kids will have confidence and we can come out on top like we did the last time.”

Pinpointing a favorite in this balanced sectional is difficult. As Jeffersonville proved last year, the team that gets hot at the end of the regular season could be the most dangerous, regardless of the records.

“It’s a sectional where records might not look good, but every team has been hot at some point in the year,” Barker said. “We saw what Jeffersonville (winning four in a row after starting 1-5, plus stunning Floyd and New Albany in the sectional) did last year, and Seymour dethroned Columbus East and showed what they’re capable of. So it’s who can play the best ball for a couple of weeks.

“Whoever comes out on top will definitely earn it. We didn’t get the chance to prove ourselves last year. So the kids are eager, to have a shot at the sectional.”

The sectional final will be scheduled for Nov. 5, with the winner to meet the survivor from Sectional 15 in a one-game regional.