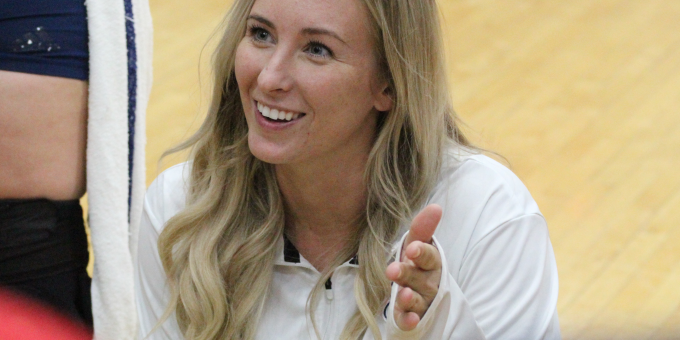 BEDFORD – Gabrielle Arthur, who guided Bedford North Lawrence volleyball for two seasons, announced she will resign following the conclusion of the season.

Arthur, a 2015 BNL grad who played three seasons at Franklin College before returning to her alma mater as an assistant, will be moving back to Franklin for an employment opportunity (to work from home while still remaining with Crane). She guided the Stars to a surprising 14-13 record in 2020, but the Stars are now 3-16 as they await to play in the Class 4A IHSAA sectional at Martinsville.

“It’s been such a learning experience,” Arthur said. “Being able to start at a 4A program, and really build from the ground up, we’ve covered a lot of ground together.

“It’s been good. I’ve had such a good group of girls, and a good group of parents who have showed me a lot of grace. I’m young (24), I’m still learning how to coach. The girls did what I asked them to do. They’ve made it easy for me. I feel really lucky.”

Arthur finished among the program’s top hitters (638 kills) and defenders (633 digs) during her career with the Stars. She was sidelined as a senior at Franklin because of a back injury. That’s when she did some junior-high coaching and discovered her passion for teaching the game to future generations. When she took over BNL in 2020, she wanted to instill the toughness she displayed as a player.

“We needed a culture change, and the younger girls are starting to understand that,” she said. “Whoever comes in here will have a tone set. I hope the hard-work, showing up every day, hustle-and-grit culture stays. I wish nothing but the best for the program. I would love to see us start to compete more with Columbus East, Bloomington South and other 4A programs.”

BNL will face either Columbus North or Martinsville in the sectional semifinal on Oct. 16.