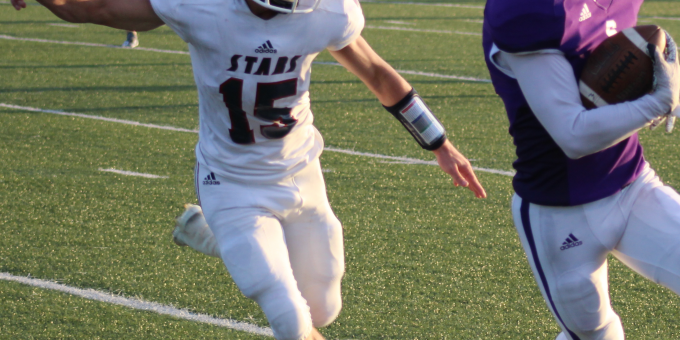 BEDFORD – Nothing stirs the heart and twists the emotional faucet to hot and gushing like Senior Night. Bedford North Lawrence, keeping with tradition, will celebrate its heavy class of 17 prior to the home-field finale, and there’s sure to be a few tears and choked throats when these Stars take their pregame bows.

As soon as the announcements are finished and the hugs completed, the Stars better turn on the intensity, else a few more postgame tears could be shed. Madison is certainly capable of playing the spoiler role to perfection. There’s a history, as the Cubs did that the last time they were invited to a BNL party.

The Stars (3-4) are in recovery mode following last week’s disappointing performance and 24-13 loss at Floyd Central, which ended a promising two-game winning streak. The Cubs (3-4) are in similar position, falling to Cooper (Ky.) in their last outing, and both teams need to start establishing momentum for the postseason. This game no longer has Hoosier Hills Conference ramifications, following Madison’s exodus from the league, but it does not lack importance.

“This late in the year, you never want to lose two in a row,” BNL coach Derrick Barker said. “Also it’s Senior Night against a good team. So we’re not taking it for granted. They’re a talented team. This would be huge. It’s a good senior group, they’re good kids that have played a lot of football. So having the night to celebrate them, and to take care of business and play good football to get a win, would mean a lot.”

After five solid weeks of improvement, BNL took a slight step backward last week. The offense failed to produce a touchdown (the first time this season), the defense added to its turnover total but allowed 21 first downs and could not get off the turf on third or fourth down. Jesse Brock’s 71-yard interception return for a score (his fourth theft of the season and BNL’s eighth total) was one of the few highlights.

“There were some mental mistakes,” Barker said. “It was less our physical ability and more being in the wrong spot, not doing what we were supposed to do. Offensively, we moved the ball, we just couldn’t get it in the end zone. When we needed a big drive, that’s when we couldn’t put first downs together. It was definitely not our best performance, but some things that are fixable.

“It’s getting back to doing things the right way, playing the way we’re capable of playing. We can’t worry about making up for that game. This is a new week and a new game. We can’t be too down or look too far ahead. We have to focus one day at a time, learn from our mistakes.”

Madison will challenge BNL’s defense at its most vulnerable point. The Cubs fancy Yancey in the passing game. Junior receiver Colin Yancey, putting up numbers like a high school version of Jerry Rice, ranks third in the state in catches and receiving yards, and he torched BNL last season for 12 receptions and 174 yards. Guess who will attract a lot of attention?

“He’s a stud, probably the best receiver we will see this year as far as size and speed, being able to track the ball and go get it,” Barker said. “I’ve seen teams double-team him, and it hasn’t mattered. So it starts with getting pressure. And you can’t do the same thing all night, whether it’s doubling him or an all-out blitz. They have weapons other places.”

Yancey has caught 58 passes for 894 yards and 10 touchdowns, the direct result of being the top target for mobile junior quarterback Kaden Oliver (90 of 151, 1,232 yards and 11 TDs). And that stands in direct contrast to BNL’s trend of allowing explosive pass plays (16 of 20-plus yards). Yancey wears No.5, in case anyone was curious as he attacks the secondary. He caught 12 passes (for three TDs) last week against Cooper, if anyone was counting.

“He doesn’t get the Jerry Rice title just yet, but he’s doing an excellent job,” Madison coach LeRoy Wilson said. “To us, it’s what we expected because of his work ethic. It’s all him and his commitment to be one of the best in the state.”

BNL won last year’s clash in Madison 41-28, and Brye Lewis was the story that night with 216 rushing yards and three touchdowns. He also authored a touchdown pass, but the ground game was the force as the Stars totaled 368 yards rushing. Parker Jones threw for 313 yards and scored three times on the ground for the Cubs. Guess what Madison will emphasize?

“The triple option is very difficult to defend, you have to be disciplined,” Wilson said. “If you can’t stop the run, you won’t be successful and it will be a long night.”

BNL hasn’t had the glaring individual numbers, although sophomore quarterback Memphis Louden has thrown for 1,058 yards and 7 touchdowns. He has spread the ball to receivers Dylan Nikirk (18 catches for 380 yards) and Ryker Hughes (16 for 399). Zane Anderson (289 yards, 5 TDs) has been the leading rusher.

The Stars have dominated this series 29-4, but few have forgotten Madison’s last trip to BNL, a stunning 21-20 win in 2019 (Wilson’s first with the program) as the Cubs stopped a two-point conversion on the final play to mar BNL’s Homecoming festivities. Better not offer the Cubs any cake, they’ll devour it.

The IHSAA will conduct the draw for the sectionals on Sunday.

Last meeting: Last year at Madison, Brye Lewis ran for 216 yards and three touchdowns as the Stars prevailed 41-28. Maddox Ray had a 25-yard interception return for a score for BNL. Parker Jones threw for 313 yards while Colin Yancey caught 12 passes for the Cubs.

Game notes: Madison won its last visit to BNL, stunning the Stars 21-20 on Homecoming in 2019. Madison receiver Colin Yancey ranks third in the state in receptions (58) and receiving yards (894). BNL has not won on Senior Night since 2017.