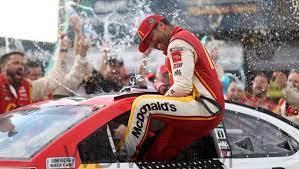 There were five caution periods for a total of 27 laps.

Thirty-one of the 40 drivers in the YellaWood 500 finished on the lead lap.

Briscoe entered the top-10 on the second lap of the 188-lap race, but when the field went three-wide on lap 14 the Rush Truck Centers/Mobil Delvac 1 driver dropped to the back of the pack to stay out of trouble.

On lap 25, the yellow flag waved for the competition caution and Briscoe pitted for tires and fuel. He restarted 33rd on lap 30.

The first incident of the race occurred on lap 57 while Briscoe was running 17th. As cars were collected, the No. 14 was pinched into the outside wall, causing heavy damage to the left side of the Rush Truck Centers/Mobil Delvac 1 Ford Mustang. Briscoe pitted twice under the caution to repair damage and was scored 39th, one lap down, at the conclusion of the first stage.

The No. 14 Ford Mustang began the second stage on lap 65 in the 35th position and was the first car one lap down when caution was called on lap 68. Briscoe pitted for additional repairs to improve the handling of the Rush Truck Centers/Mobil Delvac 1 machine. While under caution, rain began to fall and the field was brought to pit road while track drying efforts began in turns one and two.

The field returned to the track after 18 minutes and resumed the race on lap 77 with the No. 14 lined up 37th after pitting with one to go for fuel.

Briscoe was scored 22nd on lap 103 and quickly began to work his way forward as more rain approached the track.

The final caution was called for an accident on the front stretch on lap 115 as Briscoe ran 14th. While under yellow, heavy rain began to fall, eventually leading to a red flag. With rain continuing, the race was called with 117 laps complete.

Briscoe earned his 10th top-15 of the season and his second top-15 in two career NASCAR Cup Series starts at Talladega.

“The damage early on really put us behind, but once we got back on the lead lap we were able to still draft really well,” said Briscoe. “I wish we had more time to get a better finish out of it, but I’m happy with how it turned out, and I’m ready to move on to the Roval next week.”

The next event on the NASCAR Cup Series schedule is the Bank of America Roval 400 on Sunday, Oct. 10, at the Charlotte (N.C.) Motor Speedway road course. It is the sixth race of the 10-race playoffs and the final race in the Round of 12. It starts at 2 p.m. EDT with live coverage provided by NBC and SiriusXM NASCAR Radio.