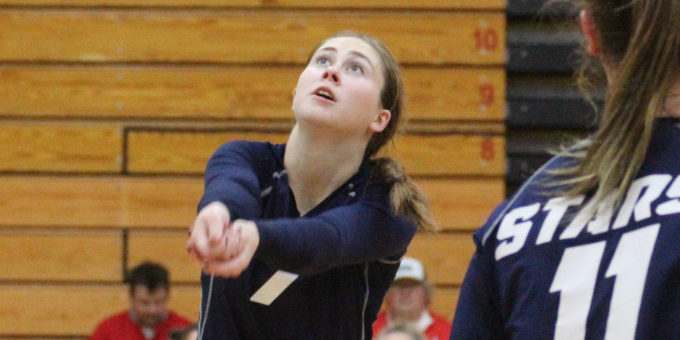 BEDFORD – Starting the final week of the regular season, with the chance to record a signature win over a quality opponent, Bedford North Lawrence suffered two brief, maddening letdowns. Not long, in terms of a five-set battle. But significant in terms of leads lost and opportunity squandered.

Madison rallied from substantial deficits in two key sets and escaped with a 25-22, 16-25, 25-22, 17-25, 15-9 victory over the frustrated Stars on Monday night. BNL (3-14) controlled every set except the last, which made the outcome even more distasteful. What would have been sweet turned sour.

“We’re not finishing right now,” BNL coach Gabrielle Arthur said. “We’re not going to win games if we can’t finish. This was a beatable team.”

The Stars zipped to a 5-1 lead in the opening set, scored four straight points for a 17-12 edge, and looked on their way. Madison pulled even at 21-21, but BNL’s Maddy Bennett banged a service ace off the net tape. The Cubs responded with Taylor Harsin’s kill off the block, and scored the final three set points on BNL hitting errors. That trend would repeat later.

BNL sparkled in Set 2, and Carlee Kern was the catalyst. She tipped home a point for 7-3, cracked down a kill after Annie Waggoner went sprinting into the stands for a save, then hammered down another for 11-4. Waggoner added an ace and her own net kill as the Stars went up 23-12 and cruised.

The turning point came late in Set 3. After Madison roared back from a 7-1 hole to force a 14-14 deadlock, Kern ripped two straight aces as BNL went up 22-17. That didn’t last long as the Stars had four consecutive hitting errors and Harsin scored on a spike off the block up front. The Cubs finished an 8-0 run while Addi Mundt served out the set.

BNL went on a 9-2 run in the middle of the fourth set, taking a 19-11 lead on two Bennett kills and a Kern block. Waggoner pushed a ball into the open corner, Kern blasted another kill, then capped the set with another block. The Stars seemed to have momentum for the deciding set. But it fizzled. Harsin thumped two kills during a run to an 8-3 lead, and the Stars couldn’t scramble any closer than two points after that.

Kern was spectacular in defeat, recording 18 kills (as the focal point of the attack) and 9 digs. Bennett had 10 kills and 18 digs, Waggoner added 6 kills and 11 digs, and Harley Tanksley had 7 digs. Emma Foreman was solid on the back row with 6 digs and two aces. BNL missed only five serves.

“Carlee had an amazing night,” Arthur said. “It’s time to start using our strengths, and Carlee obviously was a strength. She really executed. Her and Annie really connected well. This was probably the best defense Emma has played. She had really good saves, and a lot of her saves were in crucial moments.”

BNL will visit Seymour on Tuesday, then return home to face Loogootee (in the annual Cancer Awareness fundraiser) on Thursday.