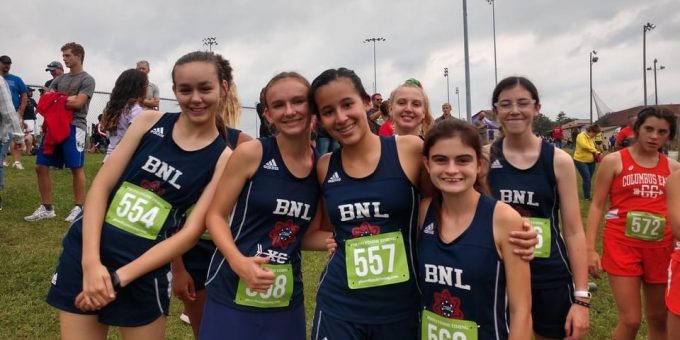 MARENGO – President Roosevelt was correct. Bedford North Lawrence’s Grace Tanksley had nothing to fear but fear itself.

Racing in the Hoosier Hills Conference meet, on a rugged course with a mean reputation, Tanksley shattered that notorious stature with a record-setting performance and a 7th-place finish to earn All-HHC honors on Saturday afternoon.

Tanksley charged to a personal-best time of 20:15.85 while taming the 5K layout at Crawford County (which hosted the event for New Albany). Her inclusion among the leaders powered the Stars to a sixth-place finish in the team competition as BNL totaled 148 points. Floyd Central, with the top four runners, easily won the race with 18 points.

Just behind the lead green wave, Tanksley tackled a course with testing hills and twists. Any worry was just wasted energy.

“We were worried about this race, on a tough course,” BNL coach Jill Vance said. “We had built up this huge thing in our minds, and it wasn’t like that.

“She just had an incredible day. This is the sort of thing we expected to see from her. She’s putting everything together at the right time. She just took off with the lead pack and didn’t let off. She’s peaking at the right time. I was thrilled. She ran a really solid race.”

Floyd’s Jaydon Cirincione was the individual champion in 19:15.85.

In the boys race, BNL was fifth with 126 points. Floyd Central won that title with 34 points.

“The Hoosier Hills Conference has always been a great testament to see not only where we are as a team, but as individuals on where they stack up with some of the best runners in the state,” BNL coach Jon Calhoun said. “Our team overall had a pretty wishy-washy day, with some solid performances while some performances we should just forget.”

“Next week is the sectional, it is show up or go home,” Calhoun said. “There is no excuses except putting your feet on the line and racing, trying to get the top 5 teams and next 10 individuals. That is what our team is facing next week. Show up, run your A race and put yourself in a position to advance, or go home. I want to be the team who shows up. Our team goals were to advance as a team. We have to show up to accomplish these goals.”

BNL will host the sectional on Oct. 9.