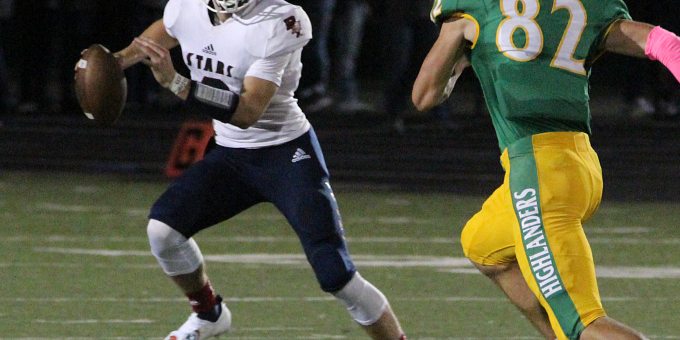 The Stars saw the ball as often as a hybrid vehicle stops at a gas station, and their dynamic offense ran out of fuel. Sputtering, stagnant and stymied, limited to a season-low points output, that was a doomed combination when going on the road.

The Highlanders, better than their bruised record indicated, dealt out the punishment, pounding the Stars during a 24-13 triumph on Friday night at Weigleb Stadium. Sophomore quarterback Tristan Robertson directed a dash, bash and crash attack that did its damage it small pieces, rather than devastating chunks. The result was equally impressive.

With a 2-to-1 advantage in time of possession, Floyd kept the Stars bottled and fizzing. When the Stars did have scoring chances, they settled for field goals rather than punching into the end zone. BNL’s lone touchdown was a 71-yard interception return by Jesse Brock. The Highlanders touted their defense as their strength, and that proved correct.

“All year, our defense has been our heart and soul,” Floyd coach James Bragg said after engineering the fourth straight win in the series. “Down on the goal line, holding Bedford to field goals instead of touchdowns, that’s huge in a game like this.”

The Highlanders would not relinquish control. Their first drive consumed 4 1/2 minutes and 78 yards, capped by Mitch Bernardi’s 15-yard dash around the right end, and that set the tone for what followed. Third-and-short: convert. Third-and-long: no problem. Fourth down: fake a punt while catching the Stars with only 10 players on the field.

Floyd’s final time of possession was a whopping 32:13. The Highlanders pounded out 21 first downs. BNL’s defense just could not get off the field and out of the line of fire.

“I felt our defense is what struggled,” BNL coach Derrick Barker said. “I’ll take the blame for that. We had a lot of opportunities and couldn’t make the play to turn the ball over or make them punt. There were plenty of times with the ball on the ground (four fumbles). It didn’t go our way.”

The only thing that really went BNL’s way was the Brock theft as he jumped a short route and raced home with his fourth pick of the season. That created a 7-7 deadlock with 3:06 left in the first quarter and could have created momentum. But Floyd came right back with another soul-crushing drive – 11 plays – with Robertson bulling into the end zone from 4 yards.

“Be a goldfish, forget about that,” Bragg said of the mentality following the pick-6. “It’s over. And we did.”

BNL had its chances. Memphis Louden connected with Kole Bailey for 34 yards, setting up first-and-goal, but the Stars had to settle for Ryker Hughes’ 28-yard field goal, cutting the lead to 14-10. Floyd answered with a 42-yard bomb from Robertson to Cody Bibelhauser, which led to a Max Grangier field goal from 26 yards and a 17-10 difference at the half.

The Stars started the second half with a sustained march, with Louden finding Dylan Nikirk for 22 yards over the middle and Hughes for 20 yards on the left sideline. But that drive fizzled at the 5, and Hughes booted a 22-yard field goal. There’s an old football cliche that field goals get you beat, and Floyd proved why on its next drive.

From the 35, all on the ground, aided by the fake punt, the Highlanders hammered home the deciding score, with Bibelhauser burrowing home from 3 yards to complete a 14-play, 7:02 drive that sucked the life from the other sideline.

During its 15:47 of offensive possession, BNL managed only 73 rushing yards. Louden was 12 of 23 passing for 156 yards, with Nikirk catching three for 54.

“Their defense is certainly good, one of the best we played all year,” Barker said. “We moved the ball well at times, couldn’t punch it in, missed some open receivers, missed some blocks.

“There were a lot of disappointing things. One of the things we talked about was bringing our own energy, and it started with their opening drive, running it right down our throat. That took some of the wind out of our sails. We have to bring more energy, even when things aren’t going well.”

Robertson was 12 of 18 passing for 164 yards, while Bernardi (77 yards), Bibelhauser (58 yards) and Garron Jenkins (61 yards) took turns as battering rams. Floyd’s bleak 1-5 record – with three losses to teams ranked in the top 10 of Class 6A in Kentucky – prior to this victory was obviously misleading. The Highlanders (2-1 in the Hoosier Hills Conference) are also still alive in the league race.

“We’re starting to learn our identity,” Bragg said. “Some people wrote us off early, but we just kept plugging away. We played some big competition, but that helps us. We finally put one away at the end of the game.”

BNL (3-4 overall, 3-2 in the league with the end of of two-game winning streak) will look to rebound next week against Madison.