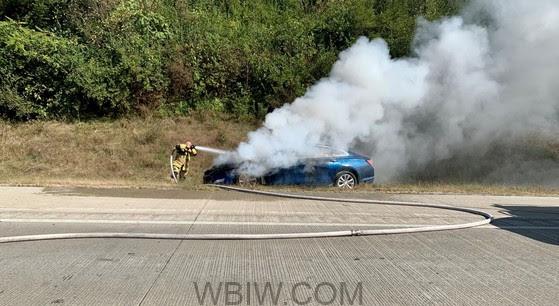 Tippecanoe County Sheriff’s Department deputies and troopers located the Malibu and attempted to stop it on the exit ramp from Interstate 65 to State Road 26.

The driver, 28-year-old Kevin Brown Jr, of Anderson, continued through the traffic light at State Road 26 and onto Interstate 65 northbound.

Officers continued the pursuit north to the 173 mile-marker where the Malibu lost control, ran off the east side of the road, and began to catch on fire.

Officers were able to remove Brown out of the Malibu, and he was safely taken into custody. Officers on scene attempted to use multiple fire extinguishers, but the Malibu became engulfed in flames.

Lafayette Fire Department arrived on the scene and extinguished the fire.

Brown was uninjured and transported to Tippecanoe County Jail on charges of resisting arrest by fleeing in a vehicle, vehicle theft, aggressive driving, reckless driving, and operating a vehicle without ever receiving a driver’s license.

Troopers from the Lafayette Post were assisted on scene by Tippecanoe County Sheriff’s Department, Lafayette Fire Department, and Joey’s Towing.