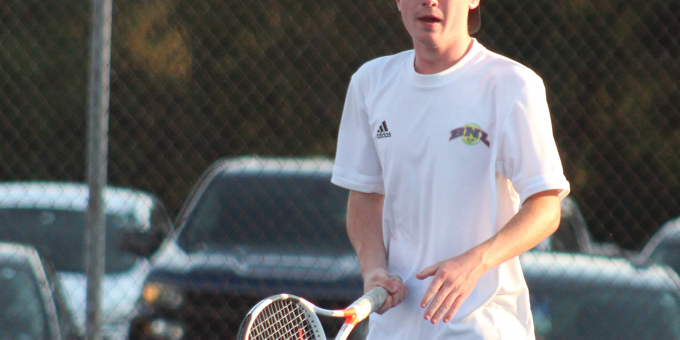 BLOOMINGTON – Bloomington South swept the doubles while edging Bedford North Lawrence 3-2 during the semifinal round of the IHSAA sectional at Bloomington North on Thursday.

The Stars, who nearly flipped around a 5-0 regular-season loss to the Panthers on Aug. 17, won the top two singles slots, and Steven Graham advanced into the singles sectional tournament with his triumph.

“The hard work is paying off,” BNL coach Chris Kurtz said. “Steven and Graham both pulled out matches that I’m nearly 100-percent sure they would have lost quickly just a few weeks ago. Both are winning the close ones now, and most of it is mental tennis. They have come so far.”

South, which adjusted its lineup and loaded up doubles for the state tournament, dominated at No.1 with Michael Asplund and Chris Liam recording a 6-1, 6-0 victory over Jayden Kemp and Nate Pemberton. Luca Jovanovic and Nico Walters fought off Caleb Jones and Carter Kimmel 6-1, 6-4 at No.2.

The Panthers also won at No.3 singles as Alexander Walters stopped Gavin Baker 6-3, 6-0.

BNL bowed out of the team tournament with a 9-11 record.

“It’s been quite a ride this year,” Kurtz said. “Even in this season-ending team loss, it sure feels a lot like a win. On day one, we started talking about tournament time. We want to be a program that wins championships, The whole season, and off-season, is preparation for these last two weeks.”

South advanced to face Bloomington North in the sectional final. The Cougars clubbed Edgewood 5-0 in the other semifinal.