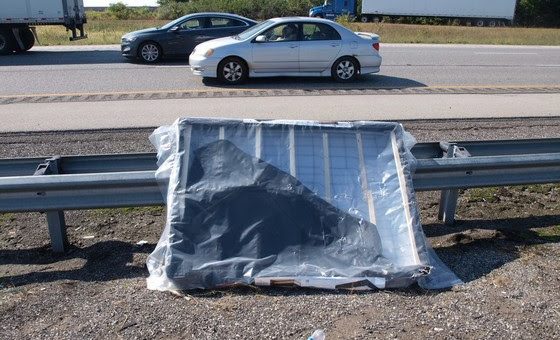 INDIANAPOLIS –  An improperly secured box spring mattress on top of an SUV started a series of events leading to a serious crash, sending three people to the hospital and causing thousands of dollars in damage.

This Thursday, at 4:20 p.m. emergency responders, were called to the scene of a serious crash on I-65 northbound at the 101-mile marker. When troopers arrived they found three heavily damaged vehicles and three people suffering from injuries.

Preliminary investigation determined the following chain of events: An SUV was driving northbound on I-65 with a box spring mattress on the roof, that SUV was being followed by a passenger car driven by a friend to the driver of the SUV.

The mattress fell off the roof and landed in the center lane.

While both men were trying to pick up the mattress another northbound car came along and struck the back of the passenger car that had stopped in the middle lane.

That collision caused the parked passenger car to strike both men who were retrieving the mattress.

A third car came along immediately after the first collision and struck the two crashed vehicles that were in the roadway.

The two men who were struck, along with the driver of one of the vehicles were transported to area hospitals, the status of their injuries is unknown at the time.