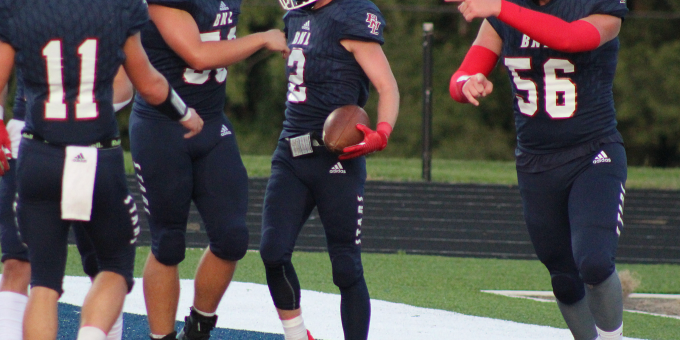 The best units from both Hoosier Hills Conference rivals will be on the turf simultaneously on Friday night when BNL (3-3, 3-1 in the league) visits Floyd Central (1-5, 1-1) for another key conference clash. The Stars still have visions of a league championship – needing to finish off its final two HHC opponents while frontrunner New Albany faces battles with Jeffersonville, Seymour and Floyd. The Highlanders also control their own league destiny if they win out.

That means the winner of the classic offense-vs.-defense confrontation will determine whose dream lives, and whose dies. Will BNL’s sparks ignite, or can Floyd douse the flames of BNL’s two-game winning streak?

The Stars, averaging 32.3 points per game, can certainly score. Sophomore quarterback Memphis Louden has thrown for 965 yards and 7 touchdowns, running back Zane Anderson has been a tough finisher with 6 touchdowns, Ryker Hughes has 4 touchdown catches and Dylan Nikirk accounted for three TDs last week. The pass plays have been electric, with four scores of 59-plus yards.

“Offensively, the last two weeks have been the best we’ve played this whole season, maybe even going back a couple of years,” BNL coach Derrick Barker said. “We’re finding out what weapons we have and how we can use them. We’ll get a big challenge with their defense, so I’m excited to see how we respond. We’ll have to battle some adversity, make some adjustments, make changes on the fly to find things that work.

Nikirk was especially productive against Jennings County, catching six passes for 175 yards. He’s likely to attract a lot of attention (especially with wideout Grant Dalton sidelined by an injury this week), but Floyd’s gaze will be locked on Louden. The Highlanders will come after him with their own heat.

“Their quarterback does a good job of finding open guys down the field,” FC coach James Bragg said. “We have to contain him. If we lose, we can’t let him beat us. Our defensive line has been playing really well. The defense has kept us in games, created turnovers.”

Floyd’s young offense – rebuilt following the graduation of star running back Wenkers Wright, massive offensive lineman Zen Michalski and quarterback Tristan Polk – has struggled, averaging only 9.2 points per game with a high output of 20 during the lone victory. But the defense, with seniors across the board, has been stout against high-quality competition.

“Defensively is where they stand out,” Barker said. “They’re big, pretty strong. They’re good on that side of the ball.

“They lost a lot of really good players on offense. But from an identity standpoint, they’re doing a lot of the same principle things, spreading the ball around more. They don’t have the one big back. They’re young on offense, they have some talented kids. Yeah, you can look at their record, look at what they’re scoring, But you have to keep in mind they’ve played some really good teams. They’ve been battle tested and they’re starting to find their rhythm now.”

The Highlanders started 0-3 against a brutal schedule (including Louisville powers Male and Manual) and had to replace Seymour (virus issues) with a game against Kentucky’s Daviess County. The only victory was a 20-13 triumph over Jeffersonville. Sophomore quarterback Tristan Robertson and sophomore running back Mitch Bernardi will be the main weapons.

“Rebuilding, reloading – we like the term reloading,” Bragg said. “Our frustrations have been injuries and COVID. We haven’t had the same team on the field in six weeks. There’s been a new person starting every week.

“Don’t quit on us. It doesn’t matter what the record is, it’s just getting hot at the right time of year. I expect us to be psyched. We can still fight for the conference title. It’s still wide open.”

BNL’s defensive issue, while surrendering 30.5 points per outing, has been allowing the explosive pass play. Last week, Jennings had scoring strikes of 56 and 72 yards, adding to the five completions of 25-plus against Seymour, the three of 32-plus against Jeffersonville, the two bombs against Bloomington North . . . the trend is quite glaring. The saving grace has been BNL’s ability to force turnovers (7 interceptions and two fumbles).

“We’ve had some timely takeaways, which has been a big focus of the defense,” Barker said. “It’s hard to stop a team and get them to punt every drive. Every now and then you need that takeaway to keep points off the board. It’s been big for us.”

Last year, BNL couldn’t contain Wright, who gashed the Stars for 223 rushing yards and scored four times. Polk threw three TD passes, and the Highlanders never punted during a 42-14 win (FC’s third straight in the series). Brye Lewis had 111 rushing yards that night and accounted for both BNL touchdowns.

The Stars are chasing their first league title since 2006. They can’t get there with another league loss.

“We’re worried about taking care of ourselves,” Barker said. “It’s a big game. Take care of our business and New Albany still has some tough games to play.”

Game notes: The Highlanders have won three straight in the series. Floyd’s game with Seymour this season was cancelled because of virus protocols. The Highlanders added Daviess Co. (Ky.) as a last-minute replacement and lost that game 21-14 in overtime.