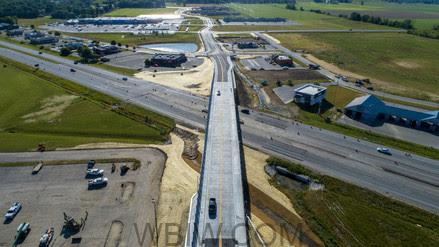 INDIANA – On Friday, the American Association of State Highway and Transportation Officials (AASHTO) announced the Grand Valley Boulevard Bridge project in Martinsville as one of 12 finalists in the 2021 America’s Transportation Awards competition.

“The Grand Valley Boulevard project being recognized as one of the top projects in the country is an absolute honor,” Governor Eric J. Holcomb said. “This is a testament to the State of Indiana’s commitment to improving quality of life and helping to develop towns, cities, and communities across the state through infrastructure.”

Part of the larger I-69 Finish Line project, the Grand Valley Boulevard Bridge was the first overpass to open over future lanes of Interstate 69 between Martinsville and Indianapolis. The bridge opened to traffic on June 15, 2020, and provides a safe, new east-west connection for both drivers and pedestrians in the City of Martinsville. Previously an at-grade intersection, the Grand Valley Boulevard bridge improves traffic flow and allows residents to safely reach residential neighborhoods, education facilities (Martinsville High School), and commercial areas.

Opening the Grand Valley Boulevard Bridge marked one of the first major construction milestones for the I-69 Finish Line project in Martinsville.

The project was named the regional winner in the Quality of Life/Community Development, Small Project category earlier this month at the Mid America Association of State Transportation Officials (MAASTO) annual meeting in Chicago.

Two national awards will be announced in October at the AASHTO annual meeting in San Diego; a Grand Prize, decided by committee vote, made up of transportation industry experts, and a People’s Choice Award, decided by the general public via an online vote.

A $10,000 cash prize is awarded to each winner and will be donated to a charity or transportation-related scholarship of the winner’s choosing. Indiana’s winnings would go toward the Indiana State Transportation Workers Foundation (ISTWF) Scholarship Program. The program was created in 2006 to provide assistance to the families of INDOT workers who were killed or disabled in the line of duty.

“We want to honor and remember those we have lost by choosing the ISTWF Scholarship Program as the recipient of the prize winnings should we be named a winner next month,” said INDOT Commissioner Joe McGuinness. “We ask everyone to go online and vote daily for the Grand Valley Boulevard Bridge project so we can continue to help out the families of our fallen employees.”

The Grand Valley Boulevard bridge project was selected as a national finalist from among 80 nominee projects representing 35 state Departments of Transportation from across the United States.

Online voting for the “People’s Choice Award” is now open at americastransportationawards.org and will close at 11:59 p.m. ET on Monday, October 25. Individuals may cast one vote per day. The America’s Transportation Award is sponsored by AASHTO, AAA, and the U.S. Chamber of Commerce.

About the Grand Valley Boulevard Bridge