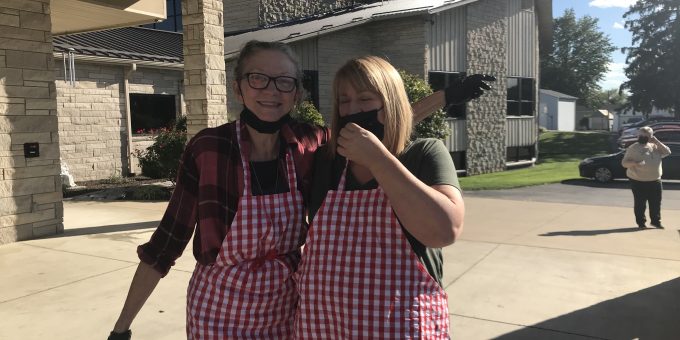 BEDFORD – There were plenty of vehicles lined up to start the 3rd annual Spaghetti Dinner to help raise awareness and funding for the Men’s Warming Shelter.

“Without all the sponsors, supporters, volunteers, and especially the support of the folks in the community who came to our dinner, the Men’s Warming Shelter (SARAH) would not exist. It takes a village. I’m so excited to belong to this loving and caring community,” said Ginny Fullen one of the organizers of the event.

This year’s event was held at the First Baptist Church.

“We had to adjust our location over the last few times, and even this year the location changed, but we were prepared to have a great event,” said Ginny Fullen.

Homelessness is an issue now faced by every community across the United States. For several years, women and children were sheltered at Becky’s Place but for men, during the winter months, there was no place for them to go and get inside from the cold elements.

Tragedy struck in the Bedford community in 2014 when a local homeless man died of hypothermia. This tragedy affected the late Father Rick Eldred who decided something needed to be done.

The Men’s Warming Shelter is in its eighth year of operation. It has seen a steady increase in the number of homeless men they serve.

The Men’s Warming Shelter will be moving to a new permanent location at 1414 H Street. SARAH ( Stone City Alliance for Recovery and Hope) purchased the building for $155,000 and renovations are expected to cost around $374,000 to allow for the installations of fire alarms, sprinklers, HVAC improvements, and a kitchen that will be added at a later time.

Several churches, businesses, and community members have supported the efforts to help the homeless population.

More than 50 men and more than 4,000 hours of overnight stays have passed through the doors of the shelter.

“We are excited how everything has come together, as you all know it has been a difficult year. All the volunteers and support staff have been really great,” said Heather Beasley.

It costs approximately $75,000 a year to operate the facility from November to March. “We give them support, no one is judged and all are accepted. We want them to tell their story, and we are going to do all we can to help. We treat them as a part of our family and city. We also try to provide them educational opportunities and get a job,” said Ginny Fullen.