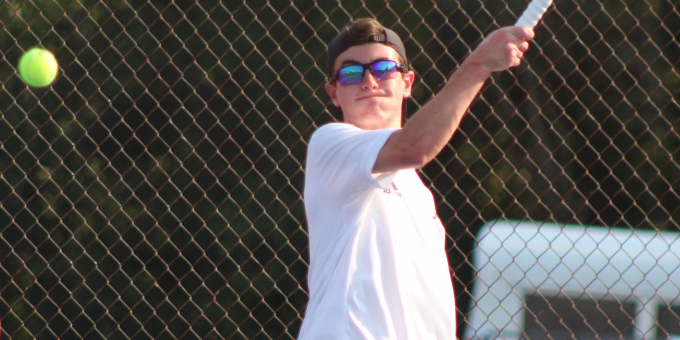 SEYMOUR – Seymour swept the doubles while edging Bedford North Lawrence 3-2 in the fourth-place match of the Hoosier Hills Conference tournament on Monday afternoon.

“Seymour is one of those good teams that really just ran over us early in the year,” BNL coach Chris Kurtz said. “I remember them being ready, and rowdy, and we weren’t very competitive. Tonight was a different story. Our guys have been playing much better against tough competition, and we actually had a good chance to sneak in and take one here.”

“Both Steven and Graham were outstanding, and won the close sets while avenging losses,” Kurtz said. “I’m really happy for them, that isn’t easy to do.”

The difference came in doubles. Reuben Kruse and Parker Thompson had key service breaks for a 6-4, 6-4 victory over Nate Pemberton and Carter Kimmel at No.2. Gratzer was placed on virus quarantine on Monday afternoon, and the Owls took advantage of BNL’s late lineup switch. Eli Meyer and Jack Vondielingen stopped Jayden Kemp and Gavin Baker 6-1, 6-0 at No.1.

“We took a pretty big blow this afternoon,” Kurtz said. “Gavin was called in for emergency duty once again. The timing couldn’t have worse heading into this final round of HHC and beginning the state tourney on Wednesday, but it’s kinda par for the course this year. I hate for the run to end this way for Cameron.”

BNL will conclude the regular season by hosting Edgewood on Tuesday, then tangle with Bloomington South in the first round of the IHSAA sectional at Bloomington North on Wednesday.