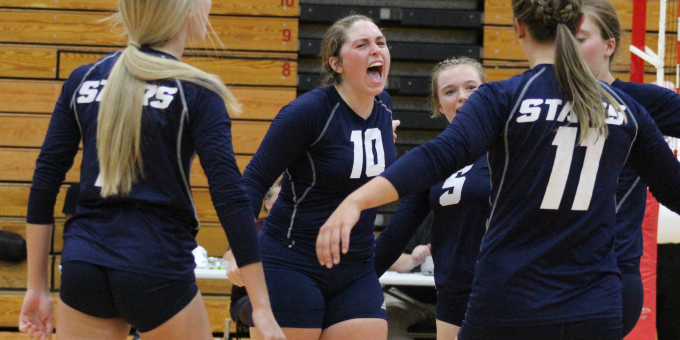 BEDFORD – Bedford North Lawrence was volleyball’s version of Michael Corleone. Every time the Stars thought they were out to a comfortable lead, Eastern Greene pulled them back in.

The Stars finally got an offer they couldn’t refuse – winning. BNL silenced the Thunderbirds at the end of each set and recorded a sweep. Carlee Kern was the key figure while powering the Stars to a 25-15, 25-14, 25-22 victory on Monday night, opening a busy week with a momentum-starting triumph.

Kern might not have been feared, but she was dreaded at the net. She slammed 10 kills and added 8 digs as the Stars (3-10) won for the second time in three matches.

“Carlee was on it,” BNL coach Gabrielle Arthur said. “She was all over the floor.”

Kern had the key points to close out the Thunderbirds, who were loud and feisty in comeback mode. BNL owned a precarious 21-20 lead in the third set, although their edge was dulling. Kern cracked down a block for a point, made a diving save to set up Maddy Bennett’s spike off a blocker at the net. Annie Waggoner’s kill made it 24-21, and her strong serve closed out Eastern (5-14).

The problem was getting to that point. BNL owns a commanding 21-4 lead in the first set, got off to a comfortable advantage in the second, and powered to a 19-14 lead in the third. Eastern just refused to go quietly while the Stars lacked a killer instinct. They haven’t had much practice at it.

“I think we want to win, but we don’t want to just dominate,” Arthur said. “When we get up those five points, let’s go for 15. It’s an adjustment to have that mentality. But we finished.

“We did an awesome job of not playing down to their level. It’s hard when you find momentum and the other team makes a good kill. It’s easy to back down. We kept the high energy and the winning mentality.”

Eastern waited too late to make its move.

“We wait a little too long to jump out and go get it. Why? I don’t know,” Eastern coach Kelsey Frye said. “It’s a little frustrating. We kicked in a little too late. We’re lacking intensity from the beginning of the set.”

“Everyone stepped in and played at a high level,” Arthur said. “The hitters are doing a good job of adjusting.”