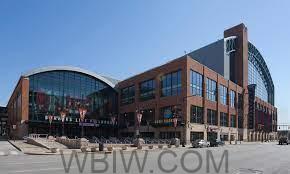 INDIANAPOLIS — The home of the Indiana Pacers and Indiana Fever has been renamed Gainbridge Fieldhouse.

The fieldhouse opened in 1999 as Conseco Fieldhouse and later became known as Bankers Life Fieldhouse.

The arena is currently undergoing $360 million in renovations, which were announced in April 2019 when the Capital Improvement Board reached a $25 million agreement with Pacers Sports & Entertainment, which operates the arena.

The first phase of renovations focused on interior work and was completed last year. The second phase includes a new entry pavilion and exterior construction, along with other interior changes, and is scheduled to be complete by the end of this year. The final phase from Jan. 1, 2022, through Oct. 1, 2022, will include completing the entry pavilion, the construction of an exterior plaza, which will feature an outdoor skating rink and completion of the interior renovations.