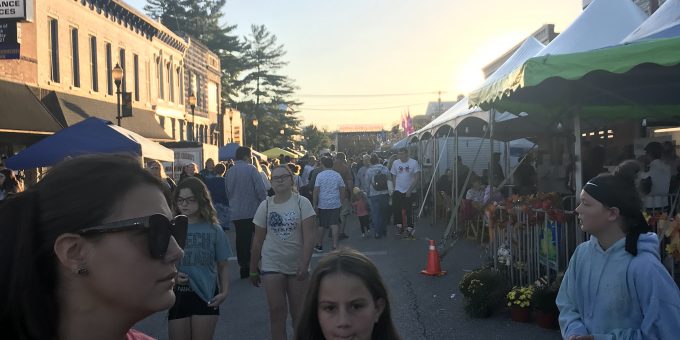 “On Wednesday we had rain and had to cancel the events on the main stage, and carnival rides however, there was still a large crowd that came out on Wednesday,” said Patton.

The festival had plenty of activities during the week-long event which included the Bear Hollow Carver which helped shaped a piece of wood into a creative piece of art. Live music is always a large source of evening entertainment as well. However, many of all ages come to seek the thrills of riding the carnival rides and eating great carnival foods. Many vendors reported they sold out of food and all of the vendors were pleased with the way things went this year.

In order to host a festival of this magnitude, it takes a year’s worth of planning. The committee has already begun to meet to get next year’s festival underway. Next year will mark 75 years of the festival in the making.

“We would not be able to put on a festival of this size if it was not for the many volunteers. We just want them to know we appreciate them so much for all the hard work they do,” Patton added.

The Mitchell Chamber of Commerce will organize next year’s event – the 75th Anniversary of the Mitchell Persimmon Festival.

“I think everyone was just so ready to get out and have this year’s festival, it was a disappointment that we did not have our festival last year. Everyone is smiling, I think they enjoyed just being able to meet their friends and neighbors,” said Samantha Holbrook.