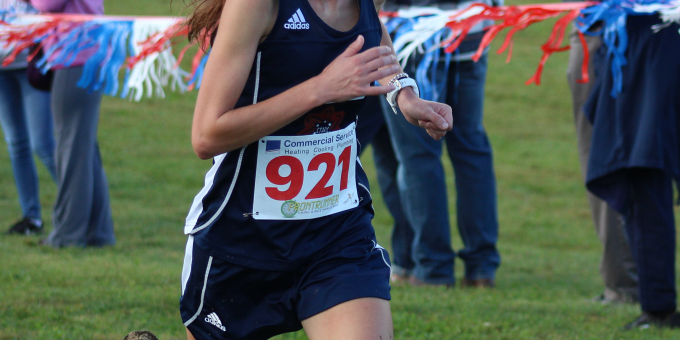 With each step a little treacherous, BNL’s Grace Tanksley skated to an impressive finish in the annual Ted Fox Invitational on Saturday morning, finishing seventh overall as Northview’s green wave cut a path to follow and left the field in its wake.

Take out the No.8 Knights, and the race was fantastic. Northview stunned everyone, dominating the top five while recording a perfect score of 15 – remarkable with a quality field featuring ranked competition and outstanding individuals – in the girls race. Tanksley, starting from the pole position on the inside of the opening straightaway, didn’t allow the Knights to totally run away.

In the boys race, BNL was ninth among the 15 teams.

Tanksley, racing without spikes on her shoes, might have reconsidered that choice after getting on the course, but she didn’t go down and crossed the line in 21:01.17, celebrating her Senior Day with a quality performance.

“I think it went really well,” Tanksley said. “I wish I had a better time, but considering I managed to stay up with a top state team, that was good. They set up a pretty good pace for me. I wasn’t planning, at the beginning, to chase after them.”

Her strategy changed with a fast start. Better to spray and splatter mud, splotching it on the shoes, legs and face of the trailers in the rear, than eat it as contrail. She had to focus on footing, and that’s easier to do out front rather than toiling in the pack.

“Any time in the mud, it was tough to stay up,” Tanksley said, and from the looks of some of her competitors as they crossed the finish, a few runners and spectators did tumble. “I came close a few times.”

Northview’s Gnister Grant won the race in 19:50.77. Columbus East’s Chloe Krueger, the only racer not wearing green to beat Tanksley to the wire, was sixth in 20:55.76. Terre Haute South was a distant second in the team competition with 94 points while No.4 Floyd Central was third with 104. No.7 Bloomington North was seventh among the 13 teams.

“It was slippery and pretty hard to get the line you wanted,” Baker said. “But our course record was set on a day like this. I’d personally rather have a day like this, than an 80-degree day and dry. This was a lot better. I enjoyed it. It feels like a race when it’s messy. It adds to it. The competition was very good. That helped push us.“

“What a great insight towards sectionals and regionals,” BNL coach Jon Calhoun said. “This race has not disappoint once again, to the amount of talent that competed in some real sloppy conditions. Times were not the greatest by most individuals, but this is the time of year where times are thrown out and the mindset of racing the individual in front of you becomes critical to your success.

“As a team I thought we did pretty good to get ourselves in position, however, we were missing that cutting edge of finishing. We had an eye set toward our goal but just didn’t have the wheels to go after it. Hopefully in these next couple of weeks of focusing on more racing strategy, we will find those wheels and turn our chariots on fire when we hit sectionals.”

“It has been a great run through these years and the impact they gave toward the younger guys on the team,” Calhoun said. “Just as they have inspired others on our team, I hope the true grit, determination, and lessons that cross country has taught will follow them throughout their lives.”

Northview won that team title as well, paced by individual champion Nolan White in 16:25.20, with 39 points. No.6 Bloomington North was second with 57 while No.25 Floyd Central also totaled 57 points.

BNL will compete in the Hoosier Hills Conference races on Oct 2.