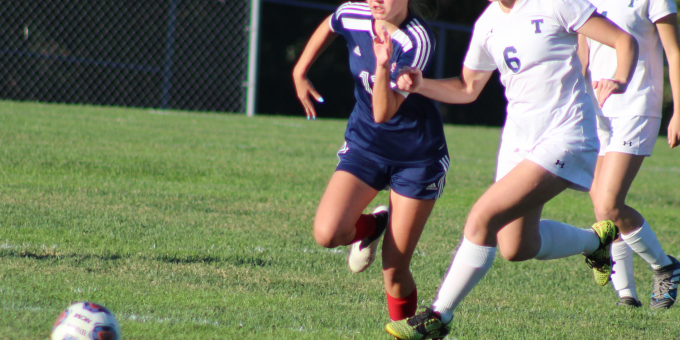 BEDFORD – Bedford North Lawrence, desperately seeking that elusive first victory and running out of time, dominated the field – until the last 10 yards. That’s where the Stars ran into Trinity Lutheran goalie Samantha Enzinger, who proved tough and impenetrable under pressure.

The Stars, at full strength, produced their best offensive attack of the season but couldn’t find any cracks for a goal as the Cougars escaped with a 1-0 victory on Thursday.

Kailene Cockerham scored the eventual game winner late in the first half, and Trinity’s bend-but-don’t-break defense made that work, turning aside 19 BNL shots. The Stars had seven good chances in the second half to pull even but couldn’t find the back of the net, not with Enzinger standing in front of it.

“Better opportunities,” BNL coach Jackie Dufresne said. “Gosh, we just have to connect it. We’re right there and ready to shoot, but it’s off target because we’re worried about the defense on our back.

“I couldn’t be more proud of the effort. They stuck with them, they fought hard, we kept our composure and played the game of soccer.”

The Cougars (6-6-0) broke through with 4:03 left in the first half. Sarah Lemming made a crossing pass that Cockerham gathered and shot past BNL goalie Crystal Webb. BNL (0-10-1) had multiple opportunities for the equalizer.

“The defense played well,” Trinity coach Thom Hayes said. “They kept everything out and forced them to take long shots. I knew our keeper and wasn’t worried about anything going in.”

Well, he had to sweat a little. Emily Zhang and Courtney Crowther had free kicks from just outside the penalty box, Zhang found Sydney Hallatt with a centering pass for a quality shot, and Chloe Harding broke free for a run into box. All that action, even while absorbing Trinity’s physical play, and nothing to show for it.

“We had adversity, fouls, and it’s easy to play down to their level,” Dufresne said. “It’s keeping your game strong, playing like you know how to play, and working with teammates. We did a great job. They played with hearts. Now we have two more games before the sectional to make something happen.”

BNL, which will learn its postseason fate when the IHSAA conducts the draw on Sunday, will entertain Edgewood on Monday.