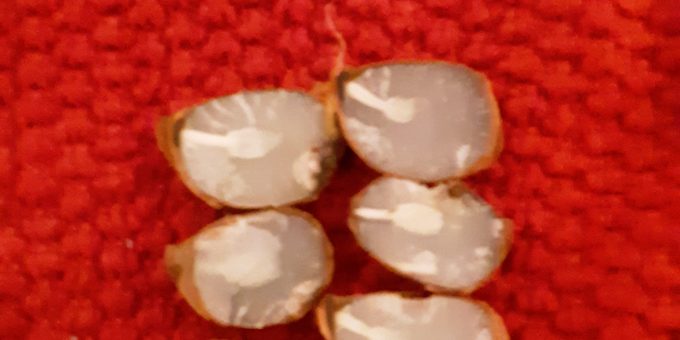 BEDFORD – The Persimmon seeds and the Old Farmers’ Almanac says Indiana is in line for a long, cold, snowy winter.

On the Almanac’s prediction map, Indiana is split in half with “cold, dry” mostly in the northern part of the state and “cold, snowy” in the south.

If the prediction is correct, it would be the second Indiana winter in a row to be more frigid than usual. Last winter, on average, was almost five degrees colder than the winter of 2019, according to the National Weather Service. There had not been a colder winter since 2014-15.

The National Weather Service has not yet made its winter predictions for Indiana. That report will come later this month.

There are other ways to predict the weather.

According to folklore, if you crack open a persimmon seed from ripe fruit and look at the shape inside (called a cotyledon), it can forecast the winter weather – fork shape the winter will be mild; spoon shape there will be a lot of snow and knife shape you can expect frigid winds that will “cut” like a blade.

The reporter opened the seeds from several persimmons to find a spoon in most every seed meaning lots of snow. The knife symbol did show up in a few of the opened persimmons, indicating frigid temperatures.

Many of us are all too familiar with the well-known weather folklore indicated by insect activity.

You can observe ants, bees, hornets, crickets, and other insects’ activity that can tells us if the weather will be cold, warm, windy, or fair.

Did you know that you can also observe spiders and their webs closely to gauge weather?

Certainly, many of you may have heard of the woolly bear caterpillar’s ability to forecast winter weather.

These caterpillars have black and brown bands; according to folklore, more black than brown indicates a harsh, cold winter, while browner than black points to a mild winter.