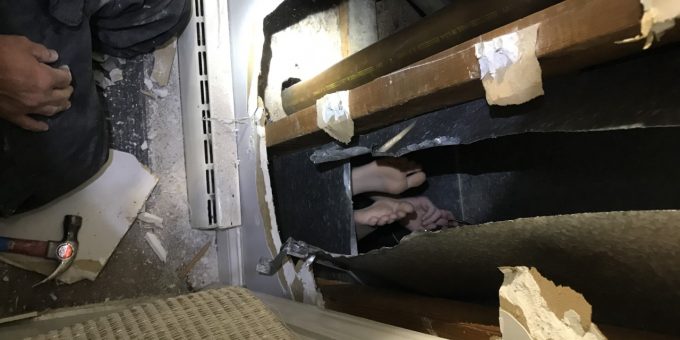 COLUMBUS – A child has been freed after getting stuck in a laundry chute, according to the Columbus Fire Department.

On Wednesday, Sept. 22, just after 3 p.m., rescue crews were called to the 2600 block of Forest Drive after a report of a child stuck in a laundry chute.

When crews arrived they found the 8-year-old stuck in the chute, who was bent at the waist with both feet and head facing up with the buttocks in a downward position. The child had entered the laundry chute from a second-story bedroom and slid down to the basement, where the child became lodged. The child was unable to completely pass through, due to the tight space.

Firefighters, after first trying to reposition the child from the bottom, then created an access hole through a first-floor wall by removing drywall.

After determining that the manipulation of the laundry chute was hampered by a floor joist located near the bottom of the chute, they cut the floor joist, which allowed the child to move through the opening of the chute to the basement floor.

The child, who was in the chute for about 40 minutes, was then transported to a local hospital and then released.