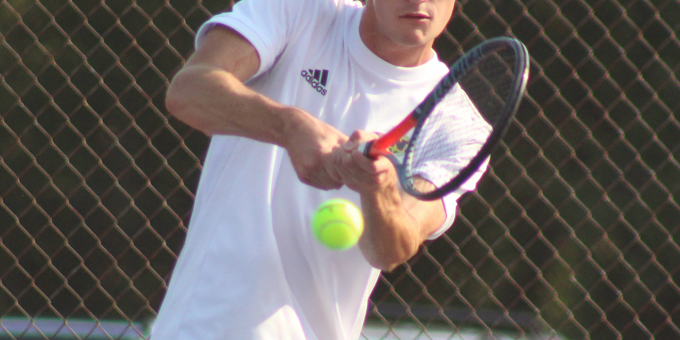 BEDFORD – Deja vu, all over again. For the second time this season, Bedford North Lawrence’s No.2 doubles duo won a tough three-setter to record the deciding team point during a victory over Jennings County.

Nate Pemberton and Carter Kimmel dropped the first set, then rallied for a 4-6, 6-2, 6-4 win over Greyson Jackson and Jansen McDonald as the Stars clipped the Panthers 3-2 in the consolation round of the Hoosier Hills Conference tournament on Thursday afternoon. That matched the victory, by an identical score, BNL posted at Jennings County on Aug. 24.

“Two doubles looked a little shaky early,” BNL coach Chris Kurtz said. “That’s a position we’ve come to really depend on, and I wasn’t too sure which way it was going to go. But Carter stayed right in it, was aggressive when we needed it most.

“And Nate, I can’t say enough about him. He hustles like no other, and just plays good, hard, smart tennis. He is a true leader, and makes the guys around him better. Those two really responded after being down early in the third to pull out the win.”

“Graham was fantastic tonight, once again completely controlling his match,” Kurtz said. “Caleb came through big for us, played steady, consistent tennis, just what we needed at 3.”

The Panthers won easily on the other courts. Owen Law blanked Gavin Baker (who was thrust into emergency service with Steven Graham sidelined by illness) 6-0, 6-0 at No.1 singles, while Jacob Vogel and Justin Ramey thumped Cameron Gratzer and Jayden Kemp 6-0, 6-0 at No.1 doubles.

BNL advanced to the fourth-place match.

“This was big for us,” Kurtz said. “Another exciting match that went the distance for the team win. We battled Jennings earlier in the year and it came down to a third set at two doubles, and this one ended the exact same way. The players and positions weren’t all the same, but the outcome was.”

The Stars will face either Jeffersonville or Seymour on Saturday morning.