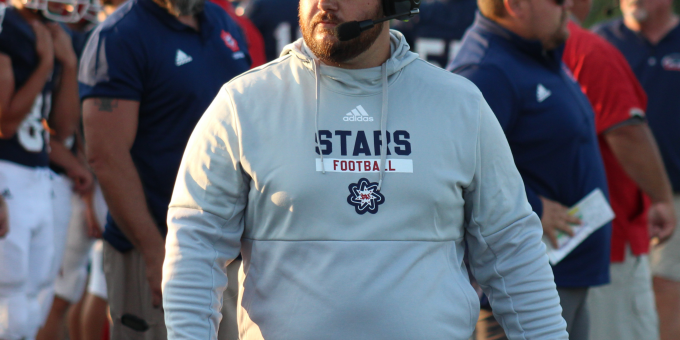 The decision was, without question, the right call. But it was a tough blow for a team that has not enjoyed much success in its history – one winning season since 1997, six postseason victories since 1985, zero sectional titles. With few options, with the regular season opening 18 days later, Jennings hiked the ball to a former Panther, tagged him with the interim label and said ‘Go get ‘em, kid.’

Justin Baldwin, a 29-year old JC graduate (2011) who played college football at Hanover, took over. After a few rough weeks, Jennings (1-4 overall, 0-2 in the Hoosier Hills Conference) celebrated his first career win last week, and no program needed the boost more. Now the Panthers, who have won back-to-back games only once in the last five years, will seek to double their win total and spoil Bedford North Lawrence’s homecoming celebration.

The Stars (2-3, 2-1 in the league) will also be seeking to start a streak, coming off the 35-29 win at Seymour last week, when they face the Panthers on Friday night. BNL will be back to full strength, with suspended starters back in the fold and injured defensive captain Jake Terrell expected to see action, and will add a late returner to the roster.

“It would be huge for us to put together a winning streak,” BNL coach Derrick Barker said.

Streaks require stability, and BNL hopes to accomplish, and establish, that, with the return of starting quarterback Memphis Louden and receiver Dylan Nikirk following the one-game absences for violation of team rules. In the void, Brye Lewis and Grant Todd had outstanding performances against the Owls. Lewis was especially productive with 196 yards passing, 164 yards rushing and four total touchdowns. Now the Stars are returning to normal.

“That didn’t change the depth chart in our mind,” Barker said. “Brye played well, but it doesn’t change the fact Memphis has been the guy for the previous four weeks. We still have a lot of confidence in him. We will still use Brye in a lot of ways, try to get back to the team we want to be and get it rolling.”

The other addition is a familiar face. Jett Jones, a starter on the offensive line for two seasons, opted to give up football when this season started, then had a change of heart. He has completed the required number of practices for eligibility, and will see action. The timing could not be better for that unit, with starting freshman Junior Areliano sidelined with a deep bone bruise. Cody Butcher will start up front. Next man up.

“Some of the younger guys stepped in, got that experience and that confidence that they can do the job,” Barker said. “When the clock was winding down (in the fourth quarter at Seymour), and we needed to put a four-minute drive together, we could rely on the offensive line to churn out yards and first downs. That was really good to see.”

Terrell, battling through a knee issue, has been an outside anchor on BNL’s 3-man defensive front. He has allowed linebackers Ryan Perry (26th in the state with 59 total tackles) and Tyson Patterson to clean up messes and Jesse Bates (16th in the state with three interceptions) to hawk the ball. BNL has been susceptible to the pass, lacking a powerful pass rush.

“We did blitz a lot last week, because it warranted sending some extra rushers,” Barker said. “I trusted our guys to play man coverage, and credit Seymour because they went up and made the play on the ball. If we can generate more pressure, play some more zone and double-team some receivers, it will be a big help.”

On the opposite side, Baldwin has been aging rapidly each week while dealing with virus absences and all the usual headaches of a head coach. Last week, running back Peyton Hayden switched to quarterback and threw for 123 yards during the 10-6 win over Madison. Brandon Braun was the leading rusher with 64 yards and Cole Marksberry caught five passes. That could change this week.

“You never know what’s going to happen,” Baldwin said. “At the end of the day, you get the list of who will be there and who won’t. You never know who is going to be the guy. So winning was huge. That was momentum we were needing.”

Hayden, no matter where he lines up, will demand attention. Last year, he ran for 111 yards against the Stars. But that was the breakout game for BNL’s Zane Anderson, who blasted his way to 118 rushing yards and three touchdowns, and Todd (who returned an interception for a score) during a 35-6 win.

Jennings has been outscored 162-42 this season, with running clocks in the second half of three losses, so it will have to rely on keeping BNL’s veer-option running game under control. The Panthers gave up only 58 rushing yards against the Cubs. The defense was one of the quick changes Baldwin made when he took over. It’s part of the culture shifts that must take place for Jennings to script a future.

“The good thing was I had coached these kids previously in middle school, so it wasn’t like I didn’t know them,” Baldwin said. “We just had to transition a little bit. It was more for me learning the ropes.

“Now it’s getting people to believe. Most of the time, you think of Jennings County as a joke, the bottom of the conference. It’s getting the community to believe, to support, and more of an ideology change. It’s changing expectations, where one or two wins is not a great year, building that culture.”

BNL, even with four straight wins in the series, cannot afford to overlook this opponent. The Stars have not reached that point yet.

“I’m sure there’s a lot of teams that look at us and think ‘Oh, it’s just BNL,’” Barker said. “So we know how that is. We have to get back to being more focused on us, and not the opponent. At the end of the day, we have to focus on our execution and our intensity for every snap, to bring relentless effort each play. That will get us the product we want.”

Last meeting: Last year at Jennings, the Stars forced three turnovers while rolling to a 35-6 victory. Zane Anderson ran for 118 yards and 3 TDs, while Grant Todd returned an interception for a score. Peyton Hayden ran for 111 yards for the Panthers.

Game notes: BNL is celebrating Homecoming. Jennings has had only one winning season since 1997.