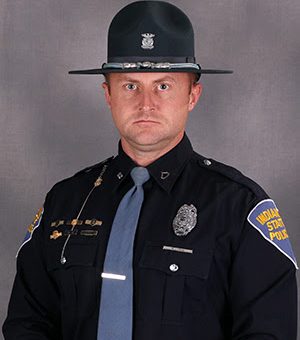 VERSAILLES – Indiana State Police Superintendent Douglas G. Carter announced the promotion of Trooper Matthew J. “Joe” Loyd to the rank of sergeant to serve as an Investigative Squad Leader at the ISP-Versailles Post.

Sgt. Loyd was selected for the position after going through the extremely competitive Indiana State Police promotion process which involves a written exam, oral interview, and a review of past work history.

Sgt. Loyd is a 1999 graduate of Greensburg High School.  He graduated from Indiana State University in 2003 with a degree in Criminology.  Sgt. Loyd graduated from the 64th Indiana State Police Recruit Academy in October 2004.  After graduation, he was assigned to the ISP-Versailles Post where he primarily patrolled Decatur County.  In 2012, Sgt. Loyd was reassigned as a detective working criminal cases for the Versailles District.  During his career, he has been a member of the Indiana State Police Tactical Intervention Platoon Team and a Hostage Negotiator.

In his new position as Investigative Squad Leader, Sgt. Loyd will be responsible for supervising a squad of detectives and criminal investigations at the Versailles Post.