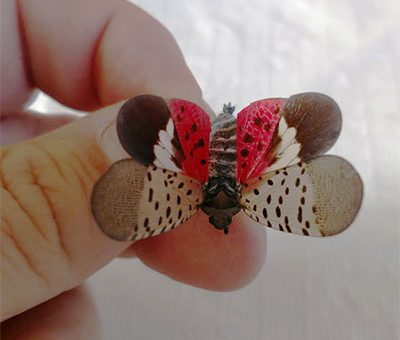 VEVAY — Earlier this summer, a photograph of a spotted lanternfly taken in southern Indiana set off a huge effort to eradicate the insect that’s on the federally regulated invasive species list.

The Vevay man’s picture was the first sighting of a spotted lanternfly in Indiana and was the farthest west the Asian insect has been found.

Individuals with the state’s Division of Entomology and Plant Pathology and the U.S. Department of Agriculture visited the site in Switzerland County to determine the extent of the infestation. A number of the insects were found in a nearby woodlot, and they were all destroyed.

Efforts to figure out how the spotted lanternflies found their way to the Indiana woodlot continue, according to Megan Abraham, director of the Division of Entomology and Plant Pathology.

“We suspect someone brought it in accidentally,” she said. “They typically swarm this time of year and lay their eggs.”

The eggs look like a patch of mud smeared on a tree or post or metal part of a railroad car, which is one of the ways the insect has spread in the United States since it was first discovered in Pennsylvania in 2014.

The Indiana location wasn’t anywhere near a railroad line. Oftentimes adult spotted lanternflies will feed on trees that overhang railroad yards, and when they’re full, they will drop out of the leaves to land on the nearest vertical surface. If they land on railroad cars, that’s where they lay their eggs, which are then transported across the country, spreading an insect that’s known for killing grapevines, fruit trees, and other agricultural crops and trees.

“It’s following the train line,” Abraham said of the insect. “They are heading out this way.”

The spotted lanternfly prefers the tree of heaven, which is an invasive tree species from Asia that’s found in Indiana and most other states. But the insects don’t do much damage to those trees, so they survive and the lanternflies move on to native trees and other plants that they do kill.

When lanternflies congregate on grapevines, it changes the pH of the grapes so they are no longer viable for making wine, Abraham said. The insects often congregate to feed on the sap of plants. While feeding they excrete a sticky substance called honeydew, which falls to the ground and is a breeding ground for sooty mold. That mold can kill trees and other plants, Abraham said.

The Indiana Department of Natural Resources urges Hoosiers to report any sightings.

Grape growers and farmers are alarmed whenever a spotted lanternfly is seen in their area. Since the insect has no natural predators in the United States, it’s feared it could become a serious agricultural pest across the country.

The spotted lanternfly already has been found on the eastern edge of Ohio near West Virginia, Abraham said.

She is hopeful the spotted lanternfly hasn’t yet made its way into any other part of Indiana and that all the ones in Switzerland County have been eradicated.

“The best part of the story is that we wouldn’t know about that find without him looking out at that walnut tree and then sending a picture to us,” Abraham said of the Vevay man. “We ended up confirming it was in his area and we can do something about it before it spreads.”

The Indiana Department of Natural Resources is asking anyone who sees a spotted lanternfly to contact them at 866-NO EXOTIC (866-663-9684) or to email DEPP@dnr.in.gov.