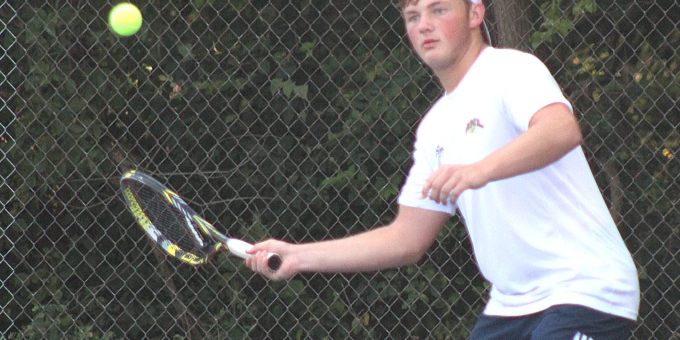 The Highlanders didn’t drop a set, but half of them were decided by a late service break.

“I’m really pleased with the way all the guys played tonight,” BNL coach Chris Kurtz said. “I think it was our best tennis so far this year. The scores won’t indicate that on every court, but we were competitive. It seemed like the big points went Floyd’s way, but again, this was a good one.”

In doubles, the Highlanders dominated at No.1, with Colin Jacobi and Braeden Poe popping Cameron Gratzer and Jayden Kemp 6-1, 6-0. Jeremy Mueller and Preston Bickel bounced Nate Pemberton and Carter Kimmel 6-4, 6-4 at No.2.

“Steven was right in it all the way,’ Kurtz said. “Graham settled in and found some things that worked, especially in the second set. Caleb was a little under the weather, but you wouldn’t have known by watching him move around the court. Both doubles teams were very good tonight with ball placement, and energy.

“These matches against great teams is one of things that excites me about coaching. To work with these guys every day, and see them take it to the court and fight. They did it, and can build on this.”

The Stars (7-9) will now compete in the consolation round of the tournament.