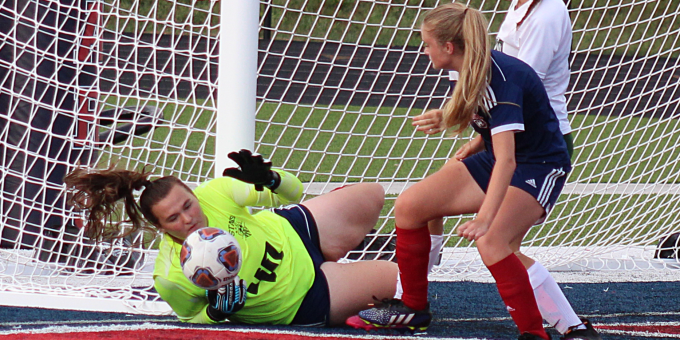 BEDFORD – The end game, to quote the villain Thanos, is inevitable. Starting two players short, later three when breathing issues sidelined one of the few, means almost certain doom. That’s the reality every night as Bedford North Lawrence fights in vain to delay the unavoidable.

Yet there’s Crystal Webb, diving everywhere in front of the goal, stopping shots in spectacular fashion, sacrificing turf burns on tired legs in an all-out effort to limit the damage. That’s a goalie’s job. If not for Webb’s work as the last line of defense, the Stars would get buried by a tsunami of goals.

The mercy-rule conclusion happened anyway. Floyd Central attacked relentlessly and blasted to a 9-0 victory, triggering the early finish with 19:46 left, on Monday night. Webb just smiled, else her competitive spirit and perfectionism would drive her nuts. She had done her absolute best, otherwise the difference would have been double.

It’s just too much to ask to play two or three players short of a full-field unit. Somebody is always wide open. The fairness of that situation, both for BNL (0-9-1, 0-6-0 in the Hoosier Hills Conference) and the competition, could be debated, but there’s no argument about the mental toughness of BNL’s senior in front of the net. She is taking everyone’s best shots.

The Highlanders (7-6-0, 4-1-0 in the league) found the gaps in BNL’s five-man back line. The Stars generated only one shot – a free kick from 30 yards by Emily Zhang that was headed away by a defender. BNL crossed midfield with possession only 8 times in 60 minutes. The rest of the time, Webb was busy diving, swatting, blocking, dodging.

“If it wasn’t for Crystal Webb, I don’t know where we would be some games,” BNL coach Jackie Dufresne said. “She always keeps us in good spirits.”

That’s a marvel all its own. Competitors hate losing. Finding the motivation every game, knowing the likely outcome before it starts, is brutally tough.

“We all want to win,” Webb said. “It’s my senior year, no wins so far, and it’s hard. That’s when you have to focus on your performance. With the challenges we’ve faced, we’ve overcome a lot.”

Indeed, the Stars have been on the short side of the numbers game, playing only three times with enough for the expected 11 on the field. Something unfortunate always seems to pop up – illness, contact tracing, a death in a family, a conflict with another school event. Webb has been the constant.

“It’s a little disheartening,” Webb said. “My friends would say I’m overly positive. Jackie tells me it’s important to keep my head up, because the team will feed off my energy.

“You gotta do what you gotta do. I struggle a lot. Perfectionism is one of my biggest weaknesses. I would let it get to me, and I would play worse. I just have to let out go and do the best I can. I want to do something I’m proud of. I feel like my personal performance is improving, which is all I can ask for. And my defensive line saves my butt a lot.”

Floyd took advantage of the free runs. Dakota Bramer, with her left foot a lethal weapon, tallied three goals (two in the first half). Other scores came from Corrina Hohl (37:34 in the first half), Torri Troutman (33:08), Morgan Ellis (31:42 in the second), Kyleigh Carbeno (25:35) and Greenley Burke (19:46). BNL had an own goal when defender Courtney Crowther attempted to clear a ball from the goal mouth and accidentally cracked it off Webb’s back and into the net.

But Webb made five diving saves, defender Cora Thomas cleared away two loose balls with Webb on the turf, and another Floyd shot banged off the goal post. On the other end, Floyd Central’s keepers touched the ball a total of six times – the majority when the back-line defenders played possession backward to keep them involved and awake. BNL just didn’t have enough bodies to mount an attack.

“That adds up,” Dufresne said. “You just have to play with what you can. It’s tough. It’s not easy to be out here.”

BNL will host Salem on Tuesday.