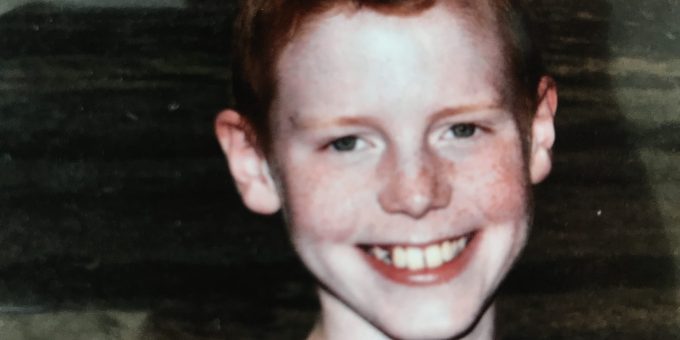 NEEDMORE – Cole Matthew Winnefeld’s smile was infectious and his determination and perseverance were inspirational to his fellow classmates, teachers, friends, neighbors, and family.

A bench was dedicated in memory of Cole Matthew Winnefeld at Needmore Elementary School. Cole was born on December 15, 2003, and died on July 29, 2015.

The money for the bench was raised by families from the Needmore area and the Needmore PTO, under the direction of former PTO president Denise Childers, her efforts were completed by Danielle Moody who is the current PTO president.

“There were several people involved in funding this project,” said Danielle Moody president of Needmore PTO.

“Cole was an amazing student, that is why the school started the “Be Amazing,” honor program for 5th graders, because Cole was amazing,” said Wendy Butterfield former Needmore principal when Cole was a student.

“My first memory of him was as a pre-schooler and watching his sister who was enrolled in kindergarten. It was not too long after that the family learned of his diagnosis,” Mrs. Butterfield added.

Cole was a real life superhero, a true fighter in every sense of the word. He had a smile that would melt hearts. He gave those around him inspiration with his caring attitude towards others. Cole, despite his illness, was at school every single day. He attended Needmore Elementary from kindergarten through 5th grade.

Cole lived his first five years of his life being a typical young boy that loved playing with Hot Wheels, Thomas the Train, and Legos.

In 2009, during a family vacation, Cole fell off his bunk bed, and the family thought he injured his back or hip. When they returned home he was limping and not sleeping well. The family took him to the pediatrician only to be sent home.

Cole continued to limp and to get sick during the night, which often woke him from his sleep. A second doctor’s visit included an x-ray and CT scan, which revealed a softball size tumor around his adrenal gland.

Cole began the fight of his life. This real life superhero battled multiple rounds of chemotherapy, multiple complex surgeries, and radiation. Cole had many experimental treatments and painful mouse anti-body therapy, novel radiation, and multiple Phase I therapies. But at the age of 11, he lost the battle and received his ultimate healing on July 29, 2015, at his home in Bedford.

Today his family continues the fight in his memory and honor.

His parents Carol and Michael, and sister Lauren work together to help other children and keep Cole’s legacy going. They established the Batcole Foundation.

“We are a non-profit that raises money for non-toxic treatment for pediatric cancer patients. We emphasize on the non-toxic. This is so children do not get as bad side effects as with the toxic treatments,” said Lauren Winnefeld Cole’s sister.

“Cole was a real role model to me, to other people, but what is very noteworthy is that someone so small can make such an impact on the community,” Lauren added ” Although our group is so small, with only a board of six we can still raise money to reach children so they can receive treatment,”

The group has raised more than a half-million dollars in trials for pediatric patients and funded three different clinical trials. The group currently concentrates on helping Indiana families. To date, approximately 20 families have been helped.

The foundation started in October 2015, just after Cole passed away, and since that time released funding to research trials.

“It feels good to be able to help families. Cole was always about how other people felt, and he tried not to focus on how bad he felt and to be able to help other families and children to get through the same thing we went through – this is an honor. We try to help them in answering questions in regards to treatment,” said Micheal Winnefeld. “With the Needmore school bench dedication – it’s a great honor that Cole’s memory lives on at Needmore.”

Fundraising efforts continue with the Batcole Foundation. The BatCole Hot Wheel Nationals event was canceled due to the ongoing pandemic. Johnny Junxions will match dollar for dollar up to a maximum of $5,000 for every donation made to the Batcole Foundation during the month of September.

You can also purchase merchandise like t-shirts and other products on the website to support the foundation.

The group continues to monitor the impact of COVID-19 and follow the guidance of local health officials for the Batcole Hero 5K Run and Walk which is scheduled on October 16th. This is now a virtual run or walk. More information on the Batcole Foundation can be found at https://batcole.foundation/.

“We want to make sure everyone is safe, so we will host a virtual race this year,” Michael continued.

“We are just grateful as parents, as well as Lauren to have Cole’s legacy live on, he always wanted to care for others and we just don’t want to ever forget him. What was done here at Needmore is part of not forgetting him,” said Carol.

“We wanted to continue the relationship between Cole’s school and his family, which was established so many years ago by Mrs. Butterfield and the Needmore staff,” said Susan Petty Needmore School principal.

“At the end of each year, an award was established by Mrs. Butterfield and the staff that is given out named the Cole Winnefeld Amazing Award. This is another way the school partners with the family, keeps them involved in our school and continues to remember such an amazing young man. The award is presented to a student at the end of the school year,” said Petty.