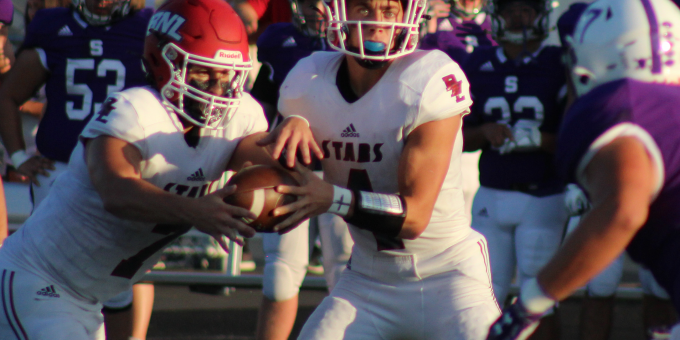 BEDFORD – The last significant play, the 168th of a three-hour marathon, of the 35-29 victory over Seymour – a three-act performance of redemption and repentance – defined the undeniable worth, the fire-breathing spit and grit, the hold-your-breath power and explosiveness of Bedford North Lawrence’s Brye Lewis.

Set the scene: the Stars are desperately attempting to kill off the final 3:24 and not allow the Owls, with sophomore quarterback Bret Perry slinging it all over Bulleit Field, a last possession to win. Third-and-9, from the Seymour 20, after sitting out a play, Lewis took the shotgun snap and ran the option right.

All that action in the space of 14 yards. Seymour defenders either slapped their helmets in frustration or stared at the turf in disbelief. First down. Game over.

For all the adversity the Stars faced, with starters missing and everyone on edge, for Lewis to emerge as the ultimate hero was justice, redemption, a reward for patience others might not have. He wasn’t the only one, of course. But the spotlight was on the quarterback, and he starred under the glare.

Football is the ultimate in team sports, requiring so many to work together and sacrifice for the common good. The IHSAA advertises itself as the bastion of education-based athletics, using sports to teach life lessons. Boy, did the Stars learn a lot of those during last week’s theatre and drama.

Lewis epitomizes what can be the best of that experience. He was the starting quarterback, earning All-Hoosier Hills Conference honors, last season. But this season, the coaching staff asked him to focus on defense and hand the offensive reigns to a sophomore. Lewis swallowed hard on that one, competed to keep his spot, then shifted without complaint on his part.

So when off-the-field circumstances thrust him back into his old role, he was ready. He was brilliant. Threw for 196 yards and two touchdowns, ran for 164 yards and two more scores. Three kneel downs to totally erase the clock cut into his rushing total. Life is about a second chances, something everyone deserves. Lewis took advantage of his.

He was quick to reflect on last season, when he was definitely fun to watch. His issue was lacking confidence in his teammates and deciding to rely totally on his own ability. Sometimes that worked, sometimes it did not. It was more about him than team. Now he’s willing to run the play, to look for receivers, unless forced to hit the eject button. It’s more about team. “I’ve changed,” Lewis said. “My head is better. I’ve improved as a player, and I knew I would get it done.”

BNL coach Derrick Barker, who made a tough decision to administer necessary team discipline with one-game suspensions to three players and count on Lewis to rescue the Stars, pointed at that third-and-9 conversion as the ultimate Lewis moment.

“Coach Bo (Miller, the offensive coordinator) asked if I wanted to run a play-action pass,” Barker said. “I thought, ‘No, not really.’ But you trust the guys to do it. We told him, if the first guy wasn’t there, tuck it and run.

“That’s all that kid, living in the weight room, the heart and tenacity he has to do what he can to win. He did a great job and the guys around him did a great job. We told them, from the beginning, we would probably play both quarterbacks, because they’re both good. It was never about Brye not being a good quarterback. We always knew, if it came down to it, we would have him to use.”

The first touchdown run was similar in style. Back to pass, faked it to a covered receiver, took off up the middle, dragged a tackler into the end zone. He had a brilliant 44-yard blast later on, faking the option, roaring up the middle, cutting left and crashing off a defender, racing down the left sideline. The passing touchdowns were equally impressive.

Kole Bailey caught the first, streaking up the slot, getting behind the linebackers and snagging a quick pass, racing 59 yards. Ryker Hughes hauled in the second, a fly pattern down the left sideline that he slowed to catch, then left the defender prone on the turf for 64 yards.

“We felt like Brye had it,” said Hughes. “He really wanted it.”

There were others who made significant contributions. Hughes unloaded a 64-yard punt to flip field position in the first half, leading to the Piaire Childs touchdown dive to the pylon. Tyson Patterson and Ryan Perry had first-half sacks to stop a drive in the red zone, and Collin Whitaker got Perry early in the fourth quarter prior to the final BNL score. Trace Rynders made a perfect form tackle in the secondary, ran the option for a key first down during the clock-killing final drive, Grant Dalton made a twisting catch on a deep pass down the right sideline. Team counts.

“A business trip, that’s what this was,” Hughes said, recalling last year’s home loss to the Owls and remembering that bitter aftertaste. The Stars took care of business.

”The pregame stuff, being short-handed (with senior captain Jake Terrell out on the defensive line), but even during the game, guys going down,” Barker said. “Grant (Todd) got hit pretty good, and Trace Rynders made a huge run. Cody Butcher hopped in on the offensive line, Tyson Patterson hopped in at quarterback for a snap, protecting the ball. We had guys step up and make plays when they were called on.”

“People can come in and play positions they haven’t played all year, like Brye,” Dalton said. “Doing his job and winning us the game.”

Going forward, the key now is true repentance, penitence, forgiveness, second chances. Everyone makes mistakes in life. The question is how they are handled. That’s the lesson to be learned. Decisions have consequences, many times affecting others. BNL, to its credit, refused to buckle. The Stars have momentum back on the sideline, hoping to maintain that fickle friendship for the next few weeks.

“The morale stayed up,” Lewis said. “I haven’t seen that. Usually, after a couple of losses, morale gets down. But this team is different. We have heart, a love for the game, we’re a family, for sure.”