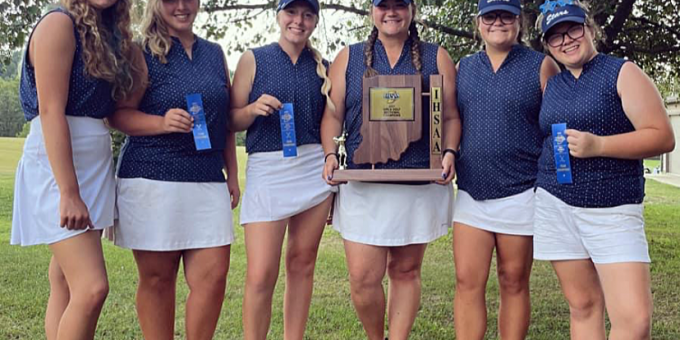 BEDFORD – The pressure was on. Bedford North Lawrence’s legacy of eight consecutive sectional championships was weighing heavy on the eve of the first stage of the IHSAA state tournament series. Samantha Biel could feel it during the team dinner.

She could feel it on the range, prior to teeing off on Saturday morning at Otis Park. But when the first shots were fired, all she could feel were good vibrations as her full swing clicked. Biel, sparking the Stars from her fifth position in the team lineup, made sure nine was divine.

Biel carded a career-best 89, leading BNL to the team title. Kenley Craig also posted an 89 as the Stars advanced to the regional at Country Oaks, one step away from the state finals, with a score of 359. The top three teams, plus the top three individuals who were not members of qualifying teams, moved on to the next level of the state tournament.

Her nervousness didn’t carry over to the course. Biel parred the first hole, birdied the par-5 sixth, and closed with a clutch par on the 18th hole to clinch her first time breaking the 90 barrier. She didn’t get nervous again until the final putt, with that five-footer to drain. Golfers aren’t supposed to track scores on the course, but she knew the personal importance of that moment.

”Yes I definitely did,” Biel said with a smile. “I tried not to, but it was happening in my head.

“When I was on the range, I wasn’t hitting it the best. That made me a little more nervous. But after the first hole, the nerves started going down, and I started playing my game. I was just doing the best I could and hoping for the best. I’m very excited. Now I hope I get under 89 next time. I showed myself I can do it.”

While the Stars didn’t post an ultra-low number on the scoreboard, they were remarkably consistent. Craig had 9 pars while matching Biel’s 89, Ellie Horton shook off a tough front nine with a back-nine 40 (with a birdie on 10) for her 90, and Chloe McFaddin birdied the fifth while totaling 91. Daphney Sproles totaled 92.

Biel and Craig tied for second (with Brownstown’s Payton Ault) for individual honors.

“That’s one thing I love about this team,” BNL coach Kori Johnston said. “We’re deep, from one to five. They just hung in there. I’m proud of them for getting through it.“

When Johnston took over the program this season, following Aaron Sanders as head coach, she was well aware of the streak and the expectations to continue it.

“I’m not going to lie,” she said. “I knew, when I took the job, this is one thing I looked forward to. I didn’t want to get too far ahead of myself, but I had it in the back of my mind. Winning it is big for us. Nothing is ever handed to you, we had to put in the work.”

Brownstown finished second in the team competition with 404, while Seymour was third with 407. Seymour’s Lainey Jackson was the individual medalist with a career-best 84.

BNL will compete in the regional on Sept. 25.

“The competition gets pretty stiff,” Johnston said. “We just need to shake off some nerves.”

The top three regional teams, plus the top five individuals who are not members of qualifying teams, will advance to the state finals at Prairie View Golf Club on Oct. 1-2.