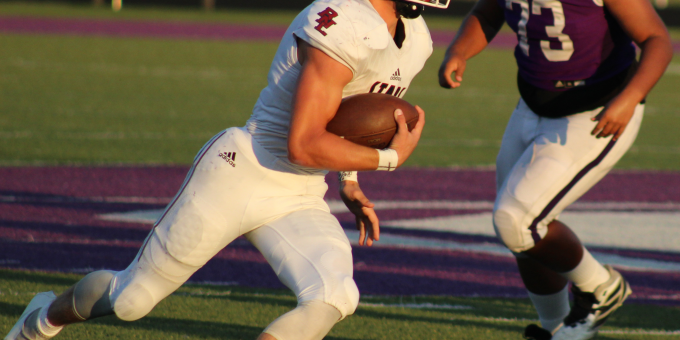 SEYMOUR – Just like the old days. Brye Lewis, running untamed and chucking it deep, electrified his adversity-plagued team with a pinch-hit performance for a home-run win. He rode to the rescue when his team needed it most.

With two offensive starters sidelined with a one-game suspension, Lewis returned to his former position at quarterback, and it was like he never left. The former all-conference star, shifted to defense as his primary spot and used as a jack-of-all-trades on the flip side, threw for two touchdowns and ran for two more as Bedford North Lawrence survived a wild 35-29 battle with Seymour on Friday night.

Lewis, elusive and sensational in the shotgun, was thrust into the spotlight when three players – including starting quarterback Memphis Louden and receiver Dylan Nikirk – were absent for violating team rules. That kind of seismic shock could devastate a team. For Lewis, it was a chance to prove himself. And did he ever.

He rifled long-ball touchdowns to Kole Bailey and Ryker Hughes, scored two touchdowns with tackle-defying blasts into the teeth of Seymour’s defense, and capped the heroic effort with a first-down conversion on the final drive, with the Owls threatening another miracle comeback. He muscled through four tacklers, throwing a couple aside with a vicious straight-arm and running over two others. No way was he going down.

The Stars (2-3, 2-1 in the Hoosier Hills Conference) had a lot at stake, mostly from a confidence standpoint. That got tested as Seymour sophomore quarterback Bret Perry and freshman receiver Jaylan Johnson played havoc in the BNL secondary. Perry was spectacular with 327 passing yards, while Johnson caught 10 for 175 yards. Imagine those two for the next two years.

But BNL fought through all that, taking a two-score lead in the second half and holding on to spoil Seymour’s homecoming festivities and win its league road opener. Not a bad night’s work.

“We made it hard on ourselves,” BNL coach Derrick Barker said. “We weren’t at our strongest, we didn’t have all the tools in the tool box, but the guys we had stepped up and answered the bell – like we knew we would. When your number gets called, when you get your shot, you can’t miss. You have to be ready to go. A lot of character.”

Lewis was the poster child for that approach. He completed 11 of 16 passes for 196 yards, ran amok for 164 yards. It’s the storybook ending.

“I don’t think anybody was going to stop him. That’s the heart, the tenacity he has, to do what he can to win for his teammates, for the team. He did a great job.”

BNL started with the first score, turning field position into a short drive, and Lewis crashed home from 19 yards on an aborted pass play. When he takes off, it’s end zone or die trying.

Back came the Owls (1-3, 1-2 in the HHC), showing the firepower that stunned Columbus East two weeks ago. Perry connected on his first four passes, hitting Jack Pennington for 30 yards in the midst of that start, and Cameron Klakamp plowed over from 3 yards.

BNL’s next drive ended with a fumble, and Perry capitalized with a 27-yard strike to a wide-open Johnson on fourth down for the go-ahead score. But if the Stars were reeling, they steadied in a heartbeat, the time it took for Lewis to hit Kole Bailey for 59 yards on the next snap to force a 14-14 deadlock.

The Stars took the halftime lead with a late drive as Lewis escaped for 44 yards down the left sideline, and Piaire Childs finished it with a beautiful move, dashing outside and diving to the pylon for an 11-yard score and the 21-14 advantage.

BNL took a two-touchdown edge when Lewis threw a 64-yard bomb to Hughes, when made an in-flight adjustment to come back for the catch and raced away from the defender, creating a 28-14 lead with 4:19 left in the third. But 20 seconds later, Perry hit Johnson over the middle, and the rookie bounced off a poor shoulder tackle and bolted 69 yards for an answering touchdown.

The momentum-turning plays took place early in the fourth. Perry hit Pennington for what looked to be a 58-yard TD pass, but it was erased by a procedure penalty. BNL’s Collin Whitaker sacked Perry on the next play, and the Owls punted. That led to the final BNL scoring drive, with Lewis bolting 28 yards to set up his own 9-yard touchdown with 5:26 left.

Seymour almost had time to come back. Perry found Pennington for 34 yards during an 80-yard march, capped by Johnson’s 15-yard TD catch. Klakamp added the two-point conversion run that cut the deficit to six with 3:29 left. But BNL never surrendered the ball back, converting three key first downs – including a 17-yard option burst by Trace Rynders, and the absolutely brutal blast by Lewis to end it.

“We know we could have Brye in the holster to use,” Barker said. “We knew the team would rally around Brye, and he would do everything he could, there was no doubt, he was going to give it all for us.”

“I knew I could do it,” Lewis said. “I knew I could lead the team. I’ve changed, as a person. Last year, I won’t lie, it was me. And this year it’s different. I trust my receivers, I knew I could throw it and get it to them. I knew I could rely on my feet to get out of any sitaiuton. But my arm is better, and my head.”

Perry completed 21 of 35 passes, often against a blitz package. Dylan Fields caught 6 passes for 68 yards as BNL’s undersized secondary got picked on. But even with all that pressure, the Stars recorded a huge win. Seymour, thanks to virus contact tracing, had an idle week after the upset of East and had two weeks to prepare for the Stars. But the Owls weren’t prepared for the Lewis assault.

“We can’t rest on it,” Barker said. “But it’s so important for these kids to feel what it’s like to win, to learn how to win games, to have that confidence.”

Grant Todd stepped into a void and totaled 40 rushing yards. He was also the leading receiver with 5 catches.