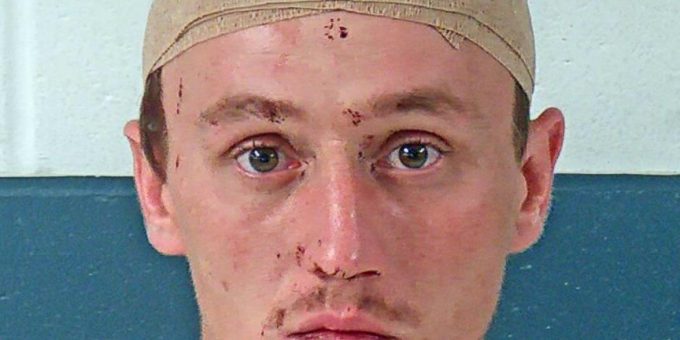 MITCHELL – A Mitchell man was arrested Thursday after Lawrence County Sheriff’s Department deputies were called to investigate a domestic fight in the 640 block of Davey Cox Road.

When police arrived, a woman told them her boyfriend 26-year-old Ryan Coats had injured her and had left the residence. She informed the officers that he may be at a home east of the residence.

An officer attempted to locate Coats at the suggested residence, unsuccessfully. Occupants at the residence advised officers that Coats had fled on foot. The officer later located Coats in the woods on the edge of the property where he was detained. Coats presented blood on his face and forehead. Coats explained to police this stemmed from an attempt to remove a bat from a witness and in the process hit himself with the bat.

The woman reported that she and Coats had argued because Coats believed that she was having an affair. Coats’ anger escalated and that is when he pushed her, causing her to fall and strike a large piece of metal. Coats also dumped a bucket filled with dirt and rocks on her head and then choked her.

Police reported the woman stated she feared Coats and was visibly shaken from the altercation. She suffered bruises to her back, leg, and had a cut on her knee. The woman also had dirt in her hair and on her shirt.

At the scene, officers discovered a hole in the exterior wall of the residence where Coats allegedly swung a baseball bat.

A female witness reported she overheard the argument and saw Coats dump the bucket on the injured woman. The witness grabbed a bat and ran to assist the woman.

She also reported once she intervened, Coats let go of the woman, went inside the residence but soon returned outside to where the women were. The witness claims this is when Coats grabbed the bat from her, hit the residence exterior wall and then hit himself. The witness agreed to sign the battery affidavit.

Coats was arrested on charges of domestic battery and strangulation.