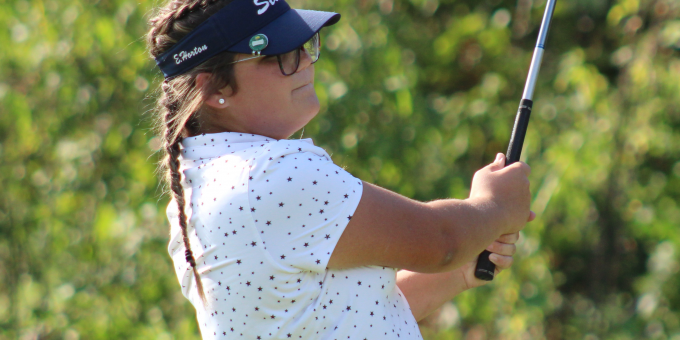 BEDFORD – The goal of every high school coach is having their team peak for the postseason. If Bedford North Lawrence’s final regular-season round at Otis Park is an accurate indication, the Stars are ready to defend their sectional title.

Paced by Kenley Craig’s career-best 39 on the back nine, BNL carded a season-best team score of 168 while conquering Brownstown (197) and Springs Valley (213) on Thursday afternoon. The Stars, who have won eight consecutive sectional championships, will chase that divine No.9 on Saturday in the first stage of the IHSAA state tournament.

”It’s all starting to come together,” BNL coach Kori Johnston said. “And at the best possible time.”

Craig birdied the par-4 11th hole and posted four other pars during her skillful tour of the back nine. Her only real problem was a double-bogey on the 10th. Chloe McFaddin fired a 42 (despite an 8 on the 14th) that featured a birdie on the 13th, and Ellie Horton birdied the 11th while finishing with 43, Samantha Biel completed the BNL scoring with 44.

“From one to five, they all played well,” Johnston said. “Kenley played great and broke into the 30s, and I know she has teammates right behind her that are capable of doing the same.

“We’re going to use tomorrow’s practice to do some final touch-ups and work on a few shots that gave us some trouble. I believe we’ll be ready to come out and show everyone what we can do on Saturday.”

BNL will start on the first tee at Otis at 8:30 a.m. on Saturday. The top three teams, plus the top three individuals who are not members of qualifying teams, will advance to the regional at Country Oaks on Sept. 25.